Qabbani Urges Abductors of 11 Lebanese Pilgrims to Release them 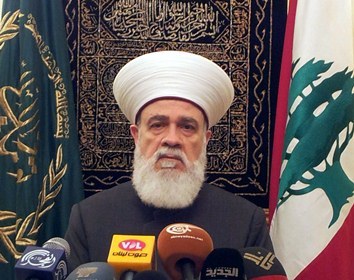 Grand Mufti Sheikh Mohammed Rashid Qabbani urged on Saturday the abductors of the 11 Lebanese Shiites pilgrims to release them as soon as possible.

“We haven’t received any new information on the abducted men,” Qabbani said after holding a meeting with the families of the 11 men in the presence of AMAL and Hizbullah representatives.

He pointed out that the families of the abductees vowed not to obstruct the general life in the country, voicing his support to their demands.

Qabbani stated that he will exert his efforts until the 11 pilgrims are released.

The 11 Shiite pilgrims were abducted by gunmen in the northern Syrian province of Aleppo on May 22 as they were returning from a pilgrimage to Iran.

No news has been heard of the men except for a video aired on al-Jazeera TV earlier this month in which the abductees claimed they were doing well.

Asked about the recent protests in Lebanon, he slammed all forms of demonstrations that disrupt life in Lebanon.

This sheikh has earned my respect. I think he is a very sensible and righteous man. Peace to all Lebanese and their religious beliefs. My belief in god is between me and my lord. It should be a personal relationship that should not have fear because of ones sect... Sunni, Shiite, Maronite, Druze, orthodox christain, malkite catholic, etc... Lebanon's strength in our religous diversity and freedom is a message to the world. Just like the beloved pope john Paul the second said, lebanon is a message to the world. Lebanon's flaw is it's sectarianism in politics but it's strength is its tolerance and message that we can all respect and live with each other. The biggest threat is the extremist, salafist, calafite dreamers financed from Saudi wahabist.

all your comment was good till you say:
"The biggest threat is the extremist, salafist, calafite dreamers financed from Saudi wahabist. "
first you conveniently forget the shia extremism that is the real root cause of our problems which is generating other ones.
second may I remind you and others of the famous declaration of the saudi King where he said that Lebanon would not be Lebanon without Christians.

Geha, the wahabi sect of islam has taken the saud royal family hostage. What began as an alliance with a strict fundamentalist form of Islam has given birth to al Qaida and intolerance that is at odds with the published position of the Saud royal family. There are many princes that have shown much tolerance, like prince bin al walead! But the royal family of Saudi Arabia is in alliance with a sect of Sunni islam that is very fundamentalist and extremist.This is fact.Saudi Arabia does not allow Swiss airlines to land at their airports because it has a cross on it's tail. How many churches are there in Saudi Arabia? Answer is zero. Not 1 church in all of the country. This is a regime that is being held hostage by an extremist religious group. I know many Saudi citizens and a couple of my cousins have worked in Ksa and they all say the same thing.

Geha it seems you can't accept reality on the ground. Shiites may have their political points of view, but no other religious cult in the world (Salafi/Wahabi) refer to others as kufar/infidels. Your Palestinian friends in Fatah Al Islam called the Shiites infidels and the Christians 'crusaders" or did you forget? The whole "infidel" ideology that motivates Islamist terrorists around the world is solely based on Salafi/Wahabi views. So get your reality on the ground right, Hezballah is one thing, their politics is one thing, but if we're going to speak about religion then accept which ideology promote violence based on religion. Shia extremism is political, whereas Sunni extremism is religion and violent. The majority of Sunnis are obviously not extremists, but get your facts right.

hold on! you are way off on this one:
- the current KSA king is changing a lot inside KSA, slowly but surely. I can talk about this subject as I have been in KSA for years.
- Please do not forget that this is the birthplace of islam, thus a primary islamic site.
- reagrding churches and crosses you mention: is it our country? these are their laws, and whether we like these laws or not, it is their country. who said this is a democratic country?
most important, you still avoid commenting on the extreme shia extremism and their weapons.......

Jeha, I don't know if you ever dealt with Shiite people or Salafis. I dealt with both and, simply to respond to your limited exposure, I would live my life close to any muslim sect but I will travel 1,000 miles away from where the nearest salafi . Simply my friend, they are haters, out of touch with the modern world, and above all, if you are not one of them , killing you is not a sin at all. Forget what the Lebanes and retarde arab media has planted in your head, our real enemy is the Salafis because they don't believe that we should exist.

Our strength is also our weakness. My opinion is that ALL [religious]clerics should stay away from politics. They should manage their estates and , eventually, advise their people from within the premises. Afterall, if we wanted to listen to their preachings, we'd go see them in their mosque/church/temple.

I'm not defending Shiite or Iranian islam... U brought that up. But they seam much more tolerant. There are Jewish and christain MPs in Iran's parliment. All the trouble in syria and the middle east (bar Israel and palestian) is a Muslim cold war between Sunni Saudi arabia and shiitte Iran.

are you kidding me? this shia is moderate? thank you for making me laugh :)
after the chah it is only extremism in and out of iran. if you said it was moderate during the chah period then I would have agreed.
do you forget how hizbushaitan tried to forcefully close all drink outlet in beirut? not in dahieh alone. so please, be logical in your comment so we can at least have some common ground to talk.

"Wortheless 11" have made a rare appearance....next block buster to be realased soon.Long Live The Syrian Civil war.

"divide and conquer" is the oldest trick in the game, i hope that we as lebanese that are so called "shiites" and "Sunnis" can use our brains and defeat this plan.