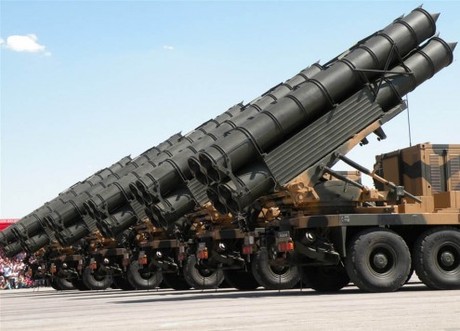 As fighting raged in Damascus and Aleppo, rebels were said to have taken control of three crossing points on the border with Turkey, which is sheltering thousands of Syrians who have fled the conflict at home.

A train convoy carrying several batteries of missiles arrived in Mardin in southeastern Turkey and will be transferred to several army units deployed on the border, according to the Anatolia news agency.

Television footage showed at least five vehicles in the convoy were carrying air defense missiles, in the latest show of force by Syria's one-time ally which is now a fervent critic of President Bashar Assad's regime.

Turkish Prime Minister Recep Tayyip Erdogan warned last month after the downing of a military jet initially blamed on Damascus that it now regarded Syria as a "clear and imminent threat".

Syria has in turn accused Turkey of sheltering rebels and training and supplying militants fighting the regime in a conflict that erupted in March 2011 and has now claimed at least 19,000 lives according to activists.

Meanwhile, Syrian rebels were now in control of the Jarabulus, Bab al-Hawa and Al-Salama posts along the nearly 900-kilometer (560-mile) frontier with Turkey, a diplomat and Anatolia said.

An amateur video showed armed men celebrating the takeover of the Al-Salama post, north of Aleppo, which the diplomat said occurred early Sunday.

The crossing faces the Turkish border post of Oncupinar near Kilis in the southeast, where refugees at a camp there clashed with Turkish police after demonstrating over their living conditions.

The video footage supplied by the shows one fighter, who identifies himself as spokesman for the "Northern Storm Brigade" of the rebel Free Syrian Army, said the border post was now under their control.

"Bab al-Salama has been liberated from the hands of Assad's mafia, after a suffocating siege on them," he said, without giving his name.

Several men standing behind him hold up their weapons to celebrate, chanting: "Allahu Akbar! (God is greatest)".

The man called the takeover of the outpost a step on the road "to liberate Aleppo, and then Damascus, and then the presidential palace".

Anatolia reported that rebel fighters took Al-Salama after hours of fighting during the night, and that the sounds of the battle could be heard from the Turkish side of the border.

Rebel forces gained control of the Bab al-Hawa crossing on Thursday, but on Saturday, a group of some 150 foreign fighters were in control of the post, an Agence France Presse photographer said.

Some fighters said they belonged to Al-Qaida in the Islamic Maghreb (AQIM), while others claimed allegiance to a group called Shura Taliban. They were armed with Kalashnikov assault rifles, rocket launchers and improvised mines.