Syria Complains to Lebanon over ‘Lebanese Violations of its Border’ 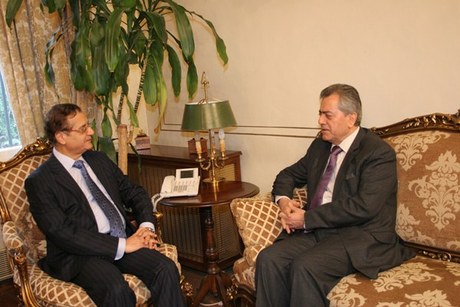 He told the station: “This is not the first time that the Lebanese authorities were handed similar complaints.”

“Others had been sent in the past,” he added.

He explained that Lebanon is being informed of “violations of the border that are being committed by gunmen.”

The ambassador said that the violations “require a Syrian response.”

Syria also demanded that Lebanon bolster border controls to prevent violations such as shooting into Syria, arms smuggling and infiltrations.

The Syrian complaint came shortly after Foreign Minister Adnan Mansour delivered a similar message to Syria over its violations of Lebanese territory.

He sent a memorandum to Ali, demanding his country to avoid the recurrence of any border incidents.

But the foreign minister’s memorandum fell short of President Michel Suleiman’s demand of a protest letter on repeated incursions to Lebanon.

Ahead of his move, Mansour shrugged off demands to summon Ali or expel him, saying “summoning does not take place among brethren.”

Syrian troops had repeatedly carried out incursions into Lebanon, saying that they are chasing army defectors and members of armed gangs.

Mansour clearly staged this knowing no one in this cabinet will dare throw him out :)
the syrian ambassador should be expelled without any discussion. but Aoun will refuse :)

I hope that everyone recognize that Syrian army which is a state authority infiltrated into Lebanon while it is not the case from Lebanon side. You can never seal the border 100% so the Syrian complaint cannot carry the same weight. Add to that I don't hear that Syria is complaining about the Iraqi, Turkey or Jordan borders smuggling. Lebanon is being single out by Syria even so Lebanon positions are still the friendliest toward Syria in the region.

Simply put, this scumbag is the worst boot licker ever along with the rest of the slaves in this government.

Is this dirt bag the Lebanese or Syrian foreign minister? He does a better job defending Syria then his fat ass Syrian counter part.

Send Abdul back to his master

Oh! Deer Syria we are very sorry that a few lebanese goats entered you sacred territory. We will take severe sanctions against them and then we will cook them and serve them to you to nourrish your great army (after having poisened them of course, so don't forget to invite bloody filthy Adnan Mansoor).