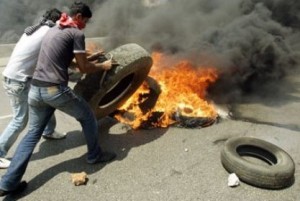 Residents of the southern city of Sidon staged rival protests on Friday as MP Bahia Hariri rejected "all forms of violence," a day after tension between the supporters of Salafist cleric Sheikh Ahmed al-Asir and members of the Popular Nasserite Movement threatened to spiral out of control.

“Sidon was abandoned and the government did not do anything to address the problem. We are keen to preserve all the components of the city in order to prevent strife,” Hariri said at a press conference she held at the headquarters of the Jamaa Islamiya in Sidon following talks with the group’s officials.

“Amid these developments, we urge everyone to show keenness on the unity of the city's residents and we have started communicating with all the political forces in the city in a bid to pacify the situation,” Hariri announced.

She stressed that the expression of views “must remain peaceful,” rejecting “all forms of violence and attacks.”

“We will carry on with our contacts with all the political forces after the government turned a blind eye to what is happening,” Hariri added.

TV footage showed a man throwing old sofas from the roof of his house to help the protestors put them on fire along with the burning tires.

Security forces remained as bystanders and later firefighters reopened the road after the protestors dispersed.

Dozens of businesses have suffered financially from the sit-in, which the Salafist cleric has said would be open ended until his demands to find a solution to Hizbullah’s arsenal are met.

The burning of tires coincided with a march that al-Asir’s supporters held for the second day in a row following Friday prayers.

The protestors marched towards the seaside corniche but returned to the sit-in site after security forces prevented them from reaching the area following a decision by the Sub-Security Council of the South.

Al-Asir told Voice of Lebanon radio (100.5) that the Popular Nasserite Movement has the right to express its opinion but in a civilized manner and not through tire burning and assaulting people.

But the head of the party, Osama Saad, snapped back, telling al-Marada movement’s website that the cleric’s sit-in is provocative and damages the economy.

The streets of Sidon witnessed the deployment of Nasserite gunmen on Thursday night after an afternoon brawl between al-Asir’s supporters and Nasserite Abu Ali Skafi left a vehicle and shop windows damaged.

An Agence France Presse photographer was also beaten by members of the Internal Security Forces who intervened to end the skirmish.

Well, Assir's protest cut one road and the others cut the remaining one, so that now the people south of Sidon are completely blocked.
this is becoming funny and thugs are roaming the streets... to be continued.

Mowaten,
you seem to have misunderstood my comment: شر البلية ما يضحك in Arabic it should be clearer :)
the problem is we all know we are being manipulated from outside, but internally we lack agreement on who the ennemies are:
- we agree on israel.
- the syrian regime is our worst ennemy in our view while you guys consider it your ally.
the problem is, the syrian regime is falling down and whoever will take over will be totally against the shias for supporting this regime.
the shia should wake up and distance themselves from this falling regime at all costs before it is too late.

I don't usually agree with Geha, but I think he makes a good point there. We agree on Israel and disagree on Syria, and so long as Nasrallah, a head of a SHIITE militant group, supports Assad, then some non-Shiite forces may want to seek revenge once Assad falls.

In the end, for the sake of Lebanese unity, Nasrallah should have not backed Assad so bluntly, even if this is against his strategic interests, because such a stance is inviting revenge and hatred towards his followers.

@mowaten
there are some major errors in your comment :)waw!
- kamal joumblat preserved the christian presence and it is only after he was killed by the syrians, and the israeli invasion of Lebanon that the syrians with joumblat kicked off the christians from the region.
- the syrian did not come at our request: they created the situation for us to ask them to come in. have you forgot the syrian saika and what they did?
- the syrians did not leave at our request: they were kicked out.
now there remains the major question: do you agree that hizbushaitan should change course and deliver their weapons to the state in order to avoid hurting the shias first and the lebanese second?

@mowaten
I was sitting on the beirut council during that period :) and no KAMAL jounblat was not OK with what they syrians through saika were doing to christians. actualy he was killed mainly because he refused the syrian entry to lebanon.
whatever you say, the syrians were kicked out of Lebanon, and that was denoted in the way they ran out. normally it takes any army a lot more time to withdraw.
now for the israeli part: the plo actions in fatehland in the south were the reason for invasions, followed by hizbushaitan actions.
if there were no more threats to israel, why should they do anything?
on the ther hand, the weapons of hizbushaitan are a concrete reason for them to do somthing :)
no I AM NOT THE ONE IN DENIAL :)

Phoenix ... Is it Bcoz Muslims place their alliance with foreign Islamic countries instead of Lebanon?

well mowaten i agree with what u said.. cant argue with that...


Lebanon is like a tool box for others to use.I`m very angry They all should get out !

Enlighten THEIR hearts? What about your own hearts and minds or perhaps you think christians never harmed anyone, especially the maronites who sliced open the bellies of pregnant women and raped children or those that threw out fellow maronites from helicopters bcuz they stood with the army against the LF. Smallah 3alaykon. You should take a look in the mirror before you talk about muslims. You'd think it was an angel who wrote that comment when in reality its a maronite... the last ones to point fingers. The nerve!

When a Hariri puts his/her hand into something, you know that nothing but disasters will come out of it. They really think they are masters of a game! m2assrin wfosson 7emeh