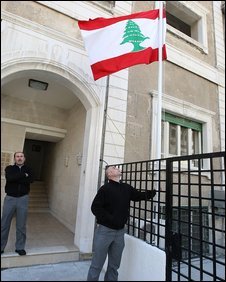 The Foreign Ministry denied that Lebanon’s Ambassador to Damascus Michel al-Khoury left the mission’s headquarters over the deterioration in the security situation of the Syrian capital.

In a statement it issued on Friday, the ministry said al-Khoury is in Beirut on a two-day administrative leave.

The denial came after diplomatic sources told al-Liwaa newspaper that the diplomat left Damascus after getting the approval of the Lebanese authorities.

He had asked the Lebanese Foreign Ministry to return to Beirut over the worsening security situation in Damascus in the past weeks, they said.

Monitoring groups have said that fierce fighting between regime troops and rebels in Damascus province have left scores dead.

i just hope he does not get himself suicided