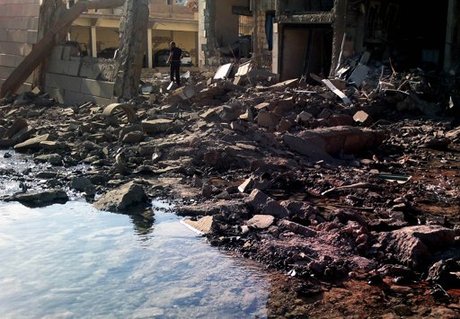 Twin suicide bombings hit a Syrian air force compound near Damascus killing dozens of people on Tuesday, monitors said, as rebels took a key town on the road between the capital and second city Aleppo and regime troops stormed a key rebel district of the central city of Homs.

Turkey, meanwhile, again warned Syria it would not hesitate to retaliate for any strike on its soil as the country's top military commander visited troops stationed along the reinforced border.

On the increasingly bloody battlefield, state television said troops entered a rebel district of central city Homs and were "pursuing the remnants of the terrorists" -- the regime's term for rebels.

Pro-government media remained silent on Monday night's suicide attacks in Harasta, a town northeast of Damascus, but a security source said the assault had been largely foiled, although some people were hurt when one vehicle blew up.

The blasts were claimed by the jihadist al-Nusra Front, which said one attacker drove a booby-trapped car and a second an explosives-packed ambulance.

Syrian Observatory for Human Rights director Rami Abdel Rahman said "dozens of people" died in the bombings, and that the fate of "hundreds of prisoners" held in the building's basement was unknown.

"The regime has not said a word about what happened last night. I hold the regime responsible for the fate of the prisoners. They shouldn't be holding all of these people in the first place," he told Agence France Presse.

AFP was unable to verify either of the widely differing accounts due to severe restrictions on journalists.

The Observatory said the attacks sparked intense fighting in Harasta between rebels and the army, which at daybreak pounded the town with shells.

It said Syrian forces on Tuesday also rained shells down on rebel belts in Aleppo, which has been fiercely contested since mid-July, and in Idlib province near the Turkish border.

Rebels took control of Maaret al-Numan, a strategic Idlib province town on the highway linking Damascus with Aleppo, after a fierce 48-hour gunbattle, the Observatory said.

"This is your tank, O Bashar!" a group of about 20 rebels shouted in a video posted by activists online as they fired off celebratory gunfire at a captured army checkpoint in the town.

The reported seizure came as soldiers moved into the central city of Homs, farther south on the same highway, in a bid to finish off insurgents there and free up forces for battle zones like Aleppo.

An activist confirmed the army had "stormed part of Khaldiyeh," but the Observatory said the neighborhood remained in rebel hands, although fighting was intense.

"The catastrophe is that there are 800 families trapped in Homs. It will be an unprecedented massacre if they take over the district," said the activist who identified himself as Abu Bilal.

A security official told AFP on Monday the army hoped to eliminate the last pockets of resistance in Homs and nearby Qusayr by the week's end to free up troops for battle zones in the north, such as Aleppo.

"I have conveyed to the Syrian government (a) strong message that they should immediately declare a unilateral ceasefire," he said.

Ban urged "the opposition forces to agree to this unilateral ceasefire when and if the Syrian government declares it," and appealed for countries to stop arming both sides.

"It has become inevitable for our armed forces to retaliate in kind... as the Syrian administration maintains its aggressive position," he told lawmakers.

Erdogan spoke as his armed forces chief inspected troops on a tour of the heavily fortified border after a number of shells landed on Turkish soil, including one strike that killed five civilians last week.

The Observatory said violence across Syria killed at least 72 people on Tuesday. It said more than 32,000 people have died since the revolt against Assad erupted in March 2011.

The conflict has also driven tens of thousands of people from their homes, and the first formal camp inside Syria for the displaced began admitting families on Tuesday, just a stone's throw away from the border with Turkey.

War in Syria is ugly, ruthless and bloody! This is no different the war we experienced in Lebanon in the 70s and 80s, and the war In Iraq from 2003 to 2010

And it often gets much worse before it gets better!

I hope all the one that got killed are Assad's men.

There is a difference between honarable resistance to a brutal regime, and indescrimenant murder by fanatics!

FT this was done by an el Qaeda linked group. Clear enough.
But that doesn't mean the chabbiha and the regime are not a bunch of criminals who are lebanon's WORST ennemies. This is where i disagree with you. I think Assad is the absolutely worst enemy of Lebanon and by far.
Forget the bombing of christian areas. Forget the torture of Lebanese. Forget the raping of our sovereignty. Forget the syrian intelligence efforts to create strife.
The neo stalinist policies of Assad SYSTEMATICALLY killed every single Lebanon loving strong balled leader in Lebanon for the past 30 years! Once they finished with killing big balled leaders, they started eliminating medium balled lebanese leaders!!! The second tier, the next generation is also on their list!!
They will only tolerate to have their allies to rule in Lebanon's "stupid democracy" (as they call our system). Anybody else- Kill-Kill-Kill. How can we ever build a country without leaders? They hijacked our country God damn it!

pfff hezbollah used ambulances in 2006 to transport weapons and fighters... and mowaten and flame thrower called that "divine" at the time.
Here's your divine reply now!!!

Mowaten, your sick logic is the same one that the zionists use against the palestenians. In your zionist logic, the syrian sunis are supposed to be slaves for the alawites forever i.e if they ever rise up against their oppressor then they are terrorists, thugs, foreigners, etc.. This is classic logic of any imperialist racist thug btw. If Bashar uses chemical weapons tomorrow you would jump in joy because you are just as much of a murderer as he is.