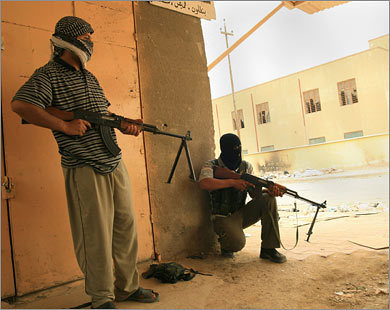 An al-Qaida front group, the Islamic State of Iraq, claimed responsibility on Friday for last month's deadly assault on a prison in the northern city of Tikrit in which dozens of its members escaped.

In a statement posted on jihadist websites, the ISI gave details of how it provided "bombs, explosive belts and silenced weapons to the inmates and coordinate with them" as militants outside the prison killed guards and detonated a car bomb.

On the evening of September 27 "a car bomb exploded outside the main gate" of the prison allowing inmates, helped by militants from the outside, to escape, the group said on Honein website.

Prisoners seized weapons of guards and killed them before "taking control of the prison," the statement said, adding that militants set ablaze "the archives of the prison and destroyed documents relating to prisoners and wanted people."

The assault resulted in the escape of "dozens of fighters," said the group.

The SITE Intelligence Group, which monitors jihadist websites, said the ISI claimed that some guards inside the prison surrendered and handed over weapons to the militants because "terror had gripped their hearts and paralyzed them."

Iraqi authorities have said that 102 prisoners escaped during the assault, including 47 members of the ISI. Officials later said that 23 prisoners were captured and four others killed hours after the prison assault.

The violence at the prison in Tikrit, the ancestral home of now-executed Iraqi dictator Saddam Hussein, came after ISI announced in July a campaign to regain territory, the targeting of judges and prosecutors, and the freeing of prisoners from jails.