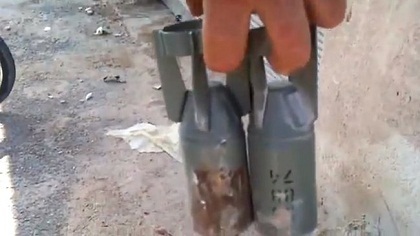 Syrian regime warplanes have dropped cluster bombs in sorties against rebels in the northwestern town of Maaret al-Numan, the insurgents told AFP on Friday.

The rebels showed an AFP correspondent in the battleground Idlib province town debris from one such cluster bomb and dozens of other bomblets that failed to explode on impact.

The devices bore markings in the Cyrillic script used in several Eastern European countries, including Russia -- a key ally of the government of President Bashar Assad.

On Sunday, Human Rights Watch issued a statement accusing the Syrian air force of using cluster bombs against the rebels and in populated areas across the strife-torn country.

The Syrian military denied the allegations the next day, saying it did not possess such weapons.

"Some news outlets that are complicit in the bloodletting in Syria have been publishing false reports that the Syrian army has been using cluster bombs against armed terrorists," it said, quoted by state news agency SANA.

"The Syrian army does not possess this kind of bomb," said the military.

Syria has not ratified a convention banning cluster bombs that has been adopted by 109 countries since 2008. The weapon is estimated to have claimed tens of thousands of lives since 1965.

A cluster bomb can carry up to 650 submunitions which are sprayed over a large area and designed to detonate on impact.

But between five and 40 percent of them fail to explode and turn into anti-personnel mines which can prove deadly for civilian populations, according to Handicap International.

A commander of rebel forces who overran in Maaret al-Numan on October 9 told AFP that the air force had used cluster bombs against the insurgents in the area for the past 20 days.

"These bombs cut people to bits," said Raed Mandil, adding warplanes had dropped them indiscriminately on residential areas as well as front lines.

"Cluster bombs have been comprehensively banned by most nations, and Syria should immediately stop all use of these indiscriminate weapons that continue to kill and maim for years," said HRW's arms director Steve Goose.

the ASSad regime resembles Israel more and more every day..

they learn from their israeli ally....!

bashar is ready to erase all villages in syria to stay in power... it is called crimes against humanity. he just thinks to reproduce what his father did with hama, but it still doesn t work. so he is going to use more and more horrific ways to try and crush the rebellion, with the benediction of M8 of course....

Why doesn't ASSad try a car bombing in Turkey?? He is a killer coward.