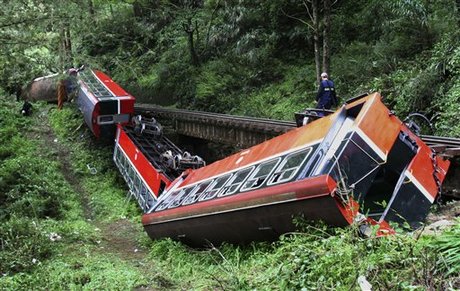 At least six people were killed and 60 others injured Wednesday when a train carrying Chinese tourists was hit by a falling tree at a popular mountain spot in central Taiwan, officials said.

The sightseeing train was traveling along Mount Ali when the tree trunk fell, causing four carriages to derail and overturn, said an official at the forestry bureau, which supervises the area.

Twenty-two people were seriously injured, according to the bureau.

The tourism bureau later confirmed that a total of 108 Chinese tourists were on the train, of which at least four were killed and 34 hurt.

"We are saddened by the accident, and the cause is being investigated," President Ma Ying-jeou told reporters.

Taiwanese officials have pledged to help relatives of the Chinese tourists to come to the island.

TV footage showed one of the carriages upside down, as it had apparently dropped several meters from a small bridge in the densely forested region.

Injured passengers were airlifted by helicopter out of the area, which is otherwise only accessible via winding mountain roads, officials said.

Other injured passengers were rushed to nearby hospitals for treatment.