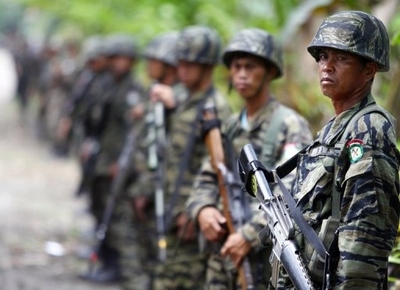 At least 10 New People's Army (NPA) rebels gunned down the soldiers as they were returning to their base from a trip to the local market near the southern city of Davao on Sunday, the military said.

"The soldiers were in civilian clothes and were unarmed," military spokesman Lieutenant Colonel Lyndon Paniza told Agence France Presse. "This is a treacherous attack by the NPA."

He said the soldiers belonged to an army unit engaged in humanitarian activities in remote villages on the fringes of Davao, the biggest city on the country's violence-plagued Mindanao island.

The government's chief peace negotiator with the communists, Alexander Padilla, warned the attack would hurt efforts to resume peace talks with the rebels.

"This will impact on the sentiments going forward in the peace process," Padilla told AFP.

Peace talks were due to have resumed in Norway last month. But Padilla said they were called off because of the rebels' long-standing condition that, before negotiations resume, 18 jailed comrades must be released.

He said the ambush appeared to be part of a fresh offensive by the rebels to pressure the government into releasing the jailed communist leaders.

But the government has long refused to release them, and Padilla said it was "unlikely" that talks with the rebels would resume this year.

In what then appeared to be a breakthrough, the government and the communists announced in February last year following talks in Norway that they had set a deadline of June 2012 to sign a final peace deal.

But the two sides were unable to reach agreement on the issue of the jailed communists, leading to a suspension of the talks and the deadline being missed.

The communists have been waging a rebellion since 1969, and more than 30,000 people have died in the conflict, according to the government.

The military estimates the NPA's current strength at about 4,000 fighters nationwide, significantly down from over 26,000 at its peak in the 1980s.

However the NPA retains support particularly in impoverished rural areas and, as shown by Sunday's assault, the rebels remain a threat.