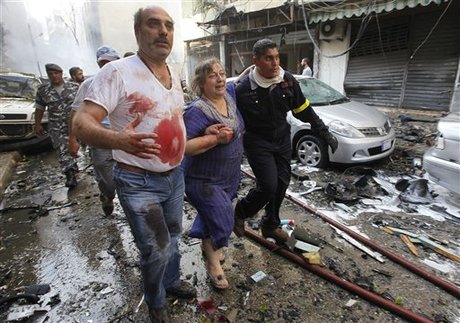 The latest investigations into the assassination of Internal Security Forces Intelligence Bureau chief Wissam al-Hasan have revealed that the driver of the booby-trapped car used in the attack had “covered his head with a hat” in order to prevent security cameras installed in the area from taking footage of his face, a media report said on Friday, as State Prosecutor Hatem Madi said the possibilities "have been narrowed down.”

“One of the culprits of the Ashrafiyeh blast that killed martyr Major General Wissam al-Hasan parked the booby-trapped car – a Toyota RAV4 carrying no other passengers – on Ibrahim al-Monzer Street," LBCI television reported.

"He then stepped out of the car, wearing a jacket with a popped collar and covering his head with a hat,” LBCI added.

The TV network quoted security sources as saying that investigators have not yet managed to identify the aforementioned person and that they are analyzing other footage in a bid to achieve some progress.

The sources also denied that investigators have interrogated a journalist whose name has been linked to the case.

Earlier on Friday, Prosecutor Madi said the “possibilities in the assassination of Internal Security Forces Intelligence Bureau chief Major General Wissam al-Hasan have been narrowed down.”

He added to Turkey's Anatolia News Agency that “no suspects have yet been identified.”

“The investigations are going ahead at a good pace and they are taking their natural course,” he said.

The investigations have managed to narrow down the possibilities and the investigators will soon complete analyzing the evidence obtained from the crime scene, he revealed.

Madi refused to comment however on media claims that some “known individuals, such as Hizbullah security official Salim Ayyash, were present at the crime scene.”

Ayyash is among the four Hizbullah members accused of being involved in the 2005 assassination of former Prime Minister Rafik Hariri in Beirut.

Madi added that he has not yet received the FBI team report on Hasan's crime scene.

An FBI team had headed to Lebanon in the wake of the assassination to examine the scene.

Analysis of its findings are being conducted in the United States.

Hasan was killed in a car bomb in Beirut's Ashrafiyeh district on October 19.

No suspects??? Or is the court filled with pro-Syrian judges? Or did the Hezz and Syria threaten them?

Can't wait to read the consperacy theories that will be posted on this article. I will definately be giving a thumbs up to the most absurd that insults everyone's intelegence.

Let me proove to you how 14 march MP are idiots and M8 the smartest.... It looks like ( according the the Hezb, Iran, Aoun ... ) that Isreal is behind all the crime in Lebanon to initiate a new civil war.... I can agree with their argument... And look how Israelis are so Powerfull to kill so many high level Ministers, MP, security official... all from March 14 , while they are incapable of killing 1 single M8 official... if they are so strong and so much infiltrate in Lebanon, they should be able to take down few hezb official member as I beleive they will go to occupy Beirut once again... and get what they want...

follow..... so pleaseM8... You are the greatest, but not God, so change your argument and facethe reality... Both Syria and Israel are the ennemy of lebanon and of course I can add most of the leader from M8 and M14 too as they behave like mafia looking only to get richer and more powerfull without thinking of the population... so hopefully we will create a 29 February political party with pink colour to finaly try to save lebanon from all of your stupidity....

March 14, my compatriots, I bet you that the great Wissam al-Hassan shall now solve his own assassination as skillfully as he solved none of the others, especially the one he was fortunate enough to have avoided, thank God almighty. Warriors of March 14, repeat after me with one loud voice: WOW WISSAM WOW. WOW WOW WOW!!! With the loss of Wissam Double-O Seven, we have lost an almost once in a lifetime apparition of such high caliber as the great French inspector Jacques Clouseau. May their souls rest in peace. May God give you patience and strength, March 14 warriors.

Dozens of citizens butchered along with the intended victims and the same story every time... We all know who the butchers are but there is nothing that can be done because they are ruling the country... Berri is guilty by association... His alliance with the terror gang of Hizbollah who is the real killing machine and the tool of the Syrian junta gives him immunity... Others associated with those butchers, such as jamil Al-Sayed, Ousama Hamdan, and countless others roam free while we fear for our lives and the lives of our loved ones anytime we leave our homes... Welcome to Lebanon, the worst zip code on the planet... back in the 70s and 80s whenever hollywood wanted to give an example of hell on earth, it would use Beirut as an example and the saga continues...

On my flight from Beirut to Tehran via Dubai wit emirates airlines I was accidently seated in business class next to a well known politician from 8M. We spoke friendly for about an hour. Then he conversation went like this:
Me: So what exactly will you (8M) do differently if you got the power after election How you gonna build a strong economy and what exactly is your future vision for the country.
Him: 14 March are corrupted they build nothing, he wanted to continue talking bad stuff about 14M but I stopped him saying I asked: about 8M future plan and not 14M!! what exactly do want to do with Lebanon He got angry and he said the conversation is done. I wanted to apologize if I hurts his feeling but he never looked back at me. Later on I was asked by a stewerdess to change my seat.

who was hoping that they will dicover anything?

Sounds familiar.... reminds us of the HezAssassin dude in Bulgaria

Naharnet, I hope you enjoyed your weekend. But now that it is unfortunately over for you, can you get back at posting the many other comments even though dust must have been collecting on them? Thank you for being the best and most honest and busiest and bestest than the bestest site. Long live March 14.