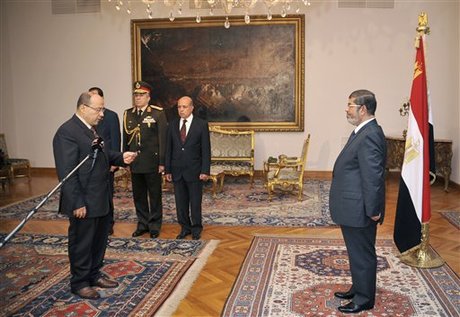 Egyptian President Mohammed Morsi assumed sweeping powers on Thursday, putting him on a collision course with the judiciary and raising questions about the country's democratic future.

The move, just a day after Morsi took diplomatic centerstage in brokering a ceasefire between Israel and Gaza's Islamist Hamas rulers, earned him the same derisive monicker of "new pharaoh" leveled at veteran strongman Hosni Mubarak before his ouster in a popular uprising last year.

"The president can issue any decision or measure to protect the revolution," according to a decree read out on television by presidential spokesman Yasser Ali.

"The constitutional declarations, decisions and laws issued by the president are final and not subject to appeal."

The move is a blow to the pro-democracy movement that toppled Mubarak last year, and raises concerns that Islamists will be further ensconced in power.

"Morsi today usurped all state powers and appointed himself Egypt's new pharaoh. A major blow to the revolution that could have dire consequences," ElBaradei wrote on his Twitter account.

Morsi also sacked prosecutor general Abdel Meguid Mahmoud, whom he failed to oust last month, appointing Talaat Ibrahim Abdallah to replace him, amid strong misgivings among the president's supporters about the failure to secure convictions of more members of the old regime.

Within minutes of the announcement, the new prosecutor was shown on television being sworn in.

The president in his pronouncements on Thursday ordered "new investigations and retrials" in the cases dealing with the deaths of protesters, a decision that could net senior military officials and see Mubarak reinvestigated.

He also said no judicial body can dissolve the upper house of parliament or the Islamist-dominated constituent assembly that is writing a new constitution and which has been criticized by the secular-minded opposition for failing to represent all segments of society.

He has also given the body -- which was due to issue a draft constitution in December -- two extra months to come up with a charter, that will then be put to a referendum.

The declaration is aimed at "cleansing state institutions" and "destroying the infrastructure of the old regime," the president's spokesman said.

"What's fundamentally problematic and threatens both the rule of law and overall democratic checks and balances is his decision to give his decrees immunity from the judiciary until the constitution is passed," Morayef told Agence France Presse.

And while the independence of the judiciary has been in question in the past, "these sledgehammer tactics only alienate the legal community," she said.

"As a judge, I feel paralyzed," one judge at Egypt's State Council told AFP.

Even before the announcement was read out, Islamists had gathered outside the High Court in central Cairo demanding the "cleansing of the judiciary."

Morsi, who belongs to the powerful Muslim Brotherhood, is the first elected president since the popular uprising that toppled Mubarak last year.

The Brotherhood has long been the best organized political force in the Arab world's most populous state and secular activists had expressed fears that it would exploit the turmoil of Mubarak's overthrow to impose its will.

What did you expect him to do since the courts dissolved Parliament??

The " one Vote one Time " nightmare is materializing.
The Egyptian people should refuse to let another form of dictatorship sneak on them.

it will not, you guys did not read the arabic text. The era of one man state is gone and the law does not allow the president in egypt more than two terms. No one man can rule any arabic country post 2011. The fire will also reach the gulf kingdoms, matter of time.

how is it "materializing" exactly? this has nothing to do with the term length of the president...

It is called Power abuse.

You have to admit this looks very bad.One good thing is we won't have to read about the Arab Spring much any more .Meet the new boss, same as the old boss. What did the USA agree to as part of Morsi taking center stage in negotiating the "ceasefire". You can expect an increase in foreign aid to Egypt, loans and more military cooperation from the US. Another prediction, Erdogan cannot allow himself to be upstaged , Expect him to grant himself more powers and then there will be 2 new Muslim Brotherhood backed dictators in the Middle East.

No they are not happy anymore, those Hizbustanis ma ilun rab and anything that does not bow down to kahmenie they do no recognise. They are against any revolution because the fire reached bashar.. so of course they are missing mubarak, one day they will miss even saad hariri.. wana bet lol??

go read the arabic text, this is temporary until the constitution is written. The president in the meantime is overriding the judiciary system because it is all mubarak era and has let the criminals go free. What is so wrong about what murse did?

There is no such thing as a temporary abuse of power. Those measure are meant to become permanent, until a revolution overthrows the Brother-in-chief.

In politics, temporary is the most permanent status going.

Realist, he's betraying his people, even if it's temporary. The democratization so Egypt is a slow and long process, there's no short cut, yet Morsi is trying to take one. It is bad.

really flame thrower? where do you get your BS from...you know that hizbocrap has been arming itself for decades with drug money?

he is the only elected official in the country...the courts are all mubarak appointed

great another Islamic republic like Iran .. THIS is what religious politics gets us...and have to agree with fadson... they were rooting for them against Assad.. and now that the Muslim brotherhood turned out on top they don't like it.. why do you think they are so against the Syrian revolution?? (besides the fact that Assad told them to be against the revolution and they HAVE to be ghas bin 3an ra2biton...

I agree with realist. Read the word temporary, common during a transition.

Considering we had basically a coup to put in an undemocratic, murdering group of thieves in Lebanon, we really can't say much.

We don't want religion and politics in the same basket. Fi mit3asbeen in all religions btw.

well YOU don't want, but clearly Egyptians do since they voted for Ikhwan in overwhelming majority for Parliament

this has absolutely nothing to do with "staying in power"

karim, when was the last time you voted for nasrallaat? and you come to talk to us about democracy?

Ikhwan are not salafis ya ghabi

funny those giving their M8 lectures... this is what egyptians voted for. so why do some bother so much? if that s the will of egyptians....