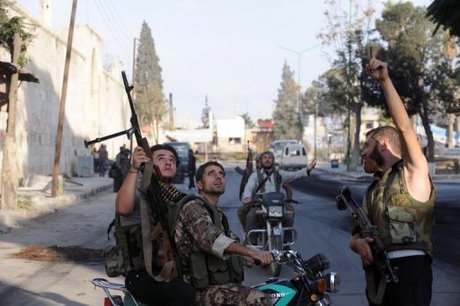 Rebel fighters seized control of a key dam on the Euphrates river in northern Syria, limiting the army's overland access to the battleground city of Aleppo to a single route, a monitoring group said on Monday.

"The capture of the Tishrin dam is very important. It means that the army basically has only one road left to Aleppo," said Rami Abdel Rahman, director of the Syrian Observatory for Human Rights.

"The highway crossing over the Tishrin dam was the last main route from Raqa province (northeast) under regime control. Now it is impassable," the head of the monitoring group told AFP by phone.

With the overnight capture, the rebels now hold sway over a wide expanse of territory between the two provinces bordering Turkey which backs the revolt against President Bashar Assad.

The other main route from Raqa to Aleppo passing through the town of Al-Thawra further south along the Euphrates is dotted with both regime and rebel checkpoints, Abdel Rahman noted.

He pointed out there is another small bridge to the north of Tishrin dam but the road is winding and difficult.

The army must now rely on the Damascus-Aleppo highway to bring men and equipment to Syria's embattled commercial hub, where fighting is at a stalemate after months of deadly urban combat.

"The stretch from Damascus to Maaret al-Numan is government-held," said Abdel Rahman. "The rebels control Maaret al-Numan, though not the highway that passes alongside it. From there to Aleppo, no one is in control."

The regime also has a parallel military road at its disposal, but this is a rugged and challenging route, Abdel Rahman said. "If the main road takes you 10 hours, this will take four times as long."

Videos posted on the Internet show about a dozen rebel fighters in military fatigues walking at night on a road crossing the Tishrin dam.

The strategic advance came after several days of clashes and a siege of the dam by the insurgents, according to the Observatory and residents, with the military responding with air strikes.

Fully agree phonix. Time is on the side of rebels. Anyone who knows would tell you that the longer and longer this drags out, the more and more in favor of the rebels or an anti-assad coup from within. But iwhere I difir is I think THIS is his contingency plan!! If he has no more army, les and less land, and a more powerfull foe by the day (not to mention the defectors) what is he going to fight with? Hopes and dreams?

Go go go FSA..... Bashar's neck should be getting nervous.

All the extra munitions from all the other bases that fell are coming in very handy. Nassy is going to lose a friendly neighbor soon. Irans fingers are being chopped.

According to the M8ers 'khilsit' over a year ago, blind faith in nasrala's predictions that business will remain as usual, they forgot the ' law kuntu a3lam', and they failed to see the future with eyes wide open, then they followed nasrala sending their children on 'jihadi duties' not to galile like he's been yelling for years but rather to qusair hums, thus making enemies with millions of syrians who will eventualy be in power in damascus. In due course most lebanese politicians will go to pay tribute to the syrian rebels including many in M8 today, hizbala will be left alone to face the dire consequences.