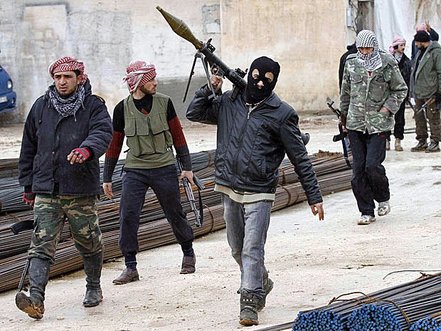 Dutch police have arrested three alleged would-be jihadists who were about to leave The Netherlands to go and fight alongside rebels in Syria, the national Prosecutor's Office said Friday.

"Detectives arrested three men on Thursday who apparently planned to travel to Syria to participate in a violent international jihad," it said in a statement.

The three, aged 22, 23 and 33, are "most probably radicalized Muslims", prosecutors said, after an investigation was opened in October following a tip-off by the Dutch secret service.

Police searched two homes and seized knives, a sword and a cross-bow, as well as packed backpacks, farewell letters and a large quantity of jihadist literature.

The men -- two of Turkish origin and the other of Iraqi origin -- allegedly collected funds to finance their journey, beginning with flights to Turkey and then heading for the Syrian border.

Two of the men had been due to fly out Thursday from Brussels to Turkey, the statement said.

The three were to appear on charges of "preparing terrorist activities" before a Rotterdam judge Friday, the statement said.

One of the men was married last week "and planned to travel to Syria with her to fight in the jihad."

"The man posed in front of his bride in one picture while armed with an AK-47 assault rifle," prosecutors said.

He also told his wife on the Internet: "I hope we will die together and go to the paradise."

A number of jihadist groups are fighting on the fringes of the Free Syrian Army against the regime of President Bashar Assad.

The London-based Quilliam think tank estimated between 1,200 and 1,500 foreign fighters are now based in Syria.

Dutch photographer Jeroen Oerlemans, who was detained in Syria in September and released a week later, said he was held in a camp where none of the jihadists were of Syrian origin.

Syria's 20-month conflict has claimed an estimated 40,000 lives, according to the Syrian Observatory for Human Rights.