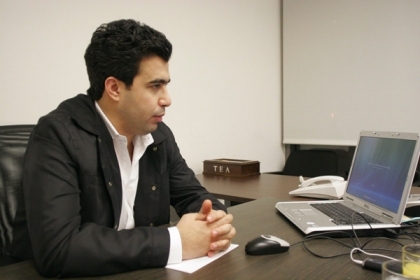 Al-Mustaqbal MP Oqab Saqr admitted on Monday that the audio recording that was circulated in the media last week, during which he was carrying out a weapons delivery deal with the Syrian opposition, was true.

“Yes this is my voice, and these are my own words,” Saqr told the pan-Arab daily Asharq al-Awsat.

He said that he is under the law and agrees to lift his parliamentary immunity if other “suspects,” who are involved in the developments in Syria, do the same.

“I am solely responsible for my acts... Let the jurisdiction carry out its tasks,” Saqr said.

The MP, in his most recent interview on Future TV on November 7, rigorously denied any involvement in arming the Syrian opposition, demanding his accusers “to sue him if they find any evidence proving his engagement is such activities.”

Saqr pointed out in comments published in Asharq al-Awsat that he will explain everything clearly “soon.”

“I will appear in a live broadcast and reveal everything I know,” Saqr told the newspaper.

Asked about the role of ex-Prime Minister Saad Hariri in the issue, the MP said that the premier tasked him to only offer the Syrian people with all the necessary humanitarian, political and media support.

“The campaign targeting me right now is to blur, deform and distort this role,” Saqr stated.

Al-Akhbar newspaper unveiled last week a taped conversation between Saqr and Abou Nehman, a “leader in the armed Syrian opposition”, who were carrying out an arms deal.

"Tell me exactly what do you want and the quantities,” Saqr answers.

The two men then agree to, “as usual,” hand the weapons to Syrian opposition members that go by the names of Abou Baraa and Abou al-Nour.

Expell him from the Al-Mustaqbal !!

at least he has the honesty of saying it! not like some M8 people caught red handed and still deny everything lol!

Ah eh chi tene! Now peace is saying it's fine if you kill but PLEASE BE HONEST AND SAY IT (only when you are caught!).
you are the smart peace, not me! ;)
Amen!

funny how people make you say what they only want to read, hilarious to see how they distort words just for the sake of their propaganda.... LOL!

Ayya propaganda ya peace?
yeuh yeuh yeuh! Voila a copy paste, I just added the quotes hopefully this is not considered propaganda ;)
"at least he has the honesty of saying it!"
Lek when you support such acts there is no "at least" my son! At least in my world ;)

better than cheering for hizbocrap who won't even confess even having been caught red handed...

mohammad_ca you are being weak like all others. Don't address the question at hand with another question completely out of context. We were just criticizing someone who thinks that this asshole is a good man because AT LEAST HE IS HONEST (after being caught hahahaha).
Point final. If you have a counter argument on the same, please share. We are a democracy!

weren't you the one who said "woof woof" below? hypocrite ;)

"school buddy"? you went to school?

Cheap insults as usual, they must all be slash brothers or cousins!
"Evidence is produced during the trial"? HAHAHAHAH
Evidence is PRESENTED during the trial, not fabricated during the trial!
Look around you, at all cases in the world. Evidences are shared, why wouldn't people share them if they are obvious?!! When someone kills someone else and a camera catches that killer, does the tribunal hide it??? When your friend sakr is caught dealing with weapons, would a tribunal wait to fabricate this evidence during the trial???
Ah yeah right we never went to schoool :)
This is the strongest argument you can have, all of you on this site! Great stuff indeed!
yeuh yeuuuuuuuuuuuh yeuh!

guys, please let us not waste time on the comments of ft. he displays a serious sickness: bashar is going.
he cannot overcome that sickness, and does not know what to say anymore.
so please let him be to his ranting and do not reply to his wild dreams comments.

mowaten, it is clear that bashar is losing ground, just read about it... the americans are now trying to position themselves for the after bashar period after having denied that it was more than just a rebellion but a true revolution...
prepare your tissues for you ll weep very soon at the loss of your beloved baathist regime...

still listening to nasrocarp who is telling you that "nothing is going on in Syria and things are going normal like always?" ba2ar..

mowaten your friends always said that nothing was going on in syria just a few rebllions in remote cities, that it will be over by the following week and so on... bashar with his mighty army isn t able to crush rebels with light weapons! and you are mocking us? you should mock your M8 friends analysis! they thought that with his army bashar would stop violence in a few days! lol!

please mowaten be realist! by the way the spokesman of the ministry of foreign affairs in syria just fled the country... end is near it seems....

what would you expect mowaten? people demonstrating shot like rabbits for weeks and you d expect them to stay still?
you thought that the rebels wouldn t find the help they needed anywhere? you believe that bashar by letting the situation rot it wouldn t come to that? of course extremists try to infiltrate and to take advantage of the situation, it always happen like that.
even americans didn t believe that it will turn that way and never lift their fingers to help the rebels!
but keep betting on bashar and you ll bite your fingers soon... i guess your M8 friends will dance and sing after his departure to thank him again for all the good he did....

A agree geha! Better learn from peace :)
I will put his quote on my twitter account and also my email signature :
"of course mowaten! evidence is never released publicly before a trial! no wonder you won t find any! evidence is produced DURING the trial not before... "
We love F A C T S. Bring some and believe me we will all be by your side dear ;)
Why we don't trust the tsl? Look how the US invaded iraq and only then admitted that the mass destruction weapons was a 'fabricated excuse' ;)
so anybody with a brain would wait for FACTS before judging. Just like your best friend was caught (purpose of this article)

@mowaten
FT was refering to the "shiaa" in his post. This is why I called him sectarian. Now his post was deleted, but obviously you had not read it before you started lecturing me... how typical...

They (M14 and M8) are all a bunch of liers and they are playing their followers like blind sheep! I hope one day the Lebanese will wake up and realise that change is desperately needed and it starts by NOT voting in and of the existing politicians!!!!!

I second that. We want new faces, politics and a secular civilized state

Supporting the Syrian revolution and overthrowing ASSad is the best thing that can happen to Lebanon. So, yes, he IS working for Lebanon.

the only way anyone wld be working for Lebanon is by dissociating itself. any other way or involvement is prejudicial to the country, esp when you get so deeply involved.

Anytime something has to do with sunnis you point out salafis/wahhabis BS so yes you are being sectarian baddak massassa?

Errare humanum est, this MP is decent. Let's judge him, and judge every person who supplied men and weapons in Syria except volunteers who seek revenge for the death of family members by the Syrian regime in Lebanon or Syria.

FartingTart he's a Shi3a and since HA came to the scene Shi3as are forbidden to put any of their energy working for Lebanon it's against their religion.

what a bunch of crap coming out of you mowaten!
only the Lebanese armed forces should have arms, all the rest are illegal weapons held by militias.
so the flow f weapons both ways is not OK.

"pose a threat to Israel"? you forgot Beirut and the mountains apparently, ghabi.

"and HA is still the only threat to israel" and to lebanon don t forget to add that....

hahaha... boring says the unemplyed who feeds us with tens of repetitive comments evryday lol :)
You're sectarian! Deal with it!

So no one asked how this conversation was recorded and how it was intercepted and who leaked it?
Msatil ya 3amme!!!
The telecom ministry is refusing to give the data to the Security agencies when it's about their allies killing and blowing cars in Lebanon, but is ready to leak data of their political opponents trading weapons!!!
And no one cares to look more into it????

God bless you you Sheikh Saad and Saqr. We need to send more weapons to the FSA and in the open...We hate Bashar All Assad...Mr. Saqr is a Shia mulim and he's hopefully visionaries like him will prevent retributions of the new Syria against it's revolution....M8 will pay dearly unfortunaltly...

allouchi, if you want to fight, go to syria and leave lebanon out of it. Go fight bashar otherwise be quiet.

so if i describe hizbocrap supporters as safawis then I am not being sectarian???

so your comments on salafis and wahhabis are not sectarian but irrelevant and lame, gotcha...

Actualy it is good for the she3a community that saqr actively supports the Syrian revolution. This would give some light in the dark tunnel of hizbustan. Mowaten, basharak is going away.. get over it, and the unless something dramatic happens the she3a of lebanon are gona face dire consequences. In that regard saqr is actualy working for lebanon and for the she3as.

i like that you say by some "miracle" lol, that means you finaly accepted the reality. Aoun will go pay tributes to the rebels and so will most M8ers exept hizubstan who is stuck and will face destructive isolation. You are too young F.T im sorry, that you even do not know that the Syrian army did kick hizzie ass in beirut in the 80's and yes killed scores of their men. Watch how Aoun taba3ak will greet the Syrian rebels one day.