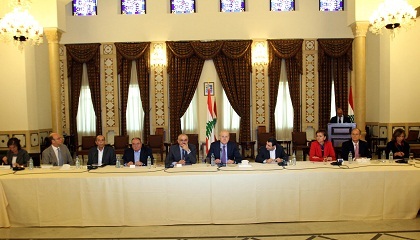 Prime Minister Najib Miqati stated on Monday that tackling the case of Syrian refugees in Lebanon has become a “very pressing” issue.

He said: “Lebanon can no longer support their burden alone.”

He made his remarks after chairing a meeting for donor countries that have provided aid to the Syrian refugees.

“We are confident that we will be able to achieve good progress to resolve all aspects of this case,” continued Miqati after the meeting that was held at the Grand Serail.

The government had placed a clear work plan that caters to the different needs of the displaced Syrians, explained the premier.

“The plan cannot be accomplished without your full support and there is a need for the international community to assist the refugees,” he stressed.

For his part, Abou Faour noted after the meeting: “As you all know differences over the situation in Syria have emerged in Lebanon, but we have reached consensus at cabinet that the case of Syrian refugees should be treated as a humanitarian cause, not a political one.”

“The Lebanese state must therefore perform its duties in full to assist and harbor the refugees in Lebanon,” the minister added.

He revealed that a total of $179,276,320 had been provided to the Syrian refugees in Lebanon by the various concerned ministries.

“Donor countries commended the government’s engagement on the issue and its concerted efforts to develop its ‘Response Plan to the crisis of displaced Syrian and Lebanese families’, launched by Miqati on December 3,” it said.

Ambassadors from donor countries commended the government’s continued commitment to uphold international humanitarian principles, including by keeping open its borders to those fleeing violence in Syria and seeking shelter in Lebanon.

Events in Damascus over the past few days have highlighted the urgency of further strengthening the current response to refugees and preparing for any increase in the numbers of those fleeing violence in Syria.

The role of host communities in Lebanon has also been praised. Since the outset of the crisis in Syria in April 2011, host communities have played an integral role in providing protection and assistance to Syrians, which at times has placed a burden on communities, services and the local economy.

Donor countries also welcomed the current planning process underway, including the formalization of the ministerial committee established to address the challenges presented by displaced Syrians in Lebanon.

“As the scale of the refugee response grows, strong government leadership and clarity of the government response structures has become even more critical,” added the statement.

Donor countries undertook to consider and review the government’s plan and continue discussions on the detail of the Government’s planned response in the coming weeks, with a view to enhancing support to Lebanon. Donors are also anticipating the planned launch on December 19 of the United Nations Response Plan for Lebanon that will support the overall government response.

Donors said they will continue to stand by Lebanon and reaffirmed their commitment to support the overall response to the Syria crisis.

Are you sure you can handle more refugees?

They don't need to.
Send all the Palestinian refugees to Palestine and then you'll be able to put the Syrians in their camps.
However I have a feeling that you would have a great problem as many would refuse to go.

Phillipo, stop posting stupid comments. You know very well that your beloved israel wont allow them to move home. Secondly, neither the palestinian refugees nor the syrian refugees are any of your business. Your attempt to pit the two against eachother is pathetic and typical satanic zionism. And FYI the palestinian refugees in lebanon all want to go home as hundreds of polls have shown so stop talking out of your a$$. Your either really stupid or deliberatly trying to create provocations in typical zionist fashion. Or both.

The Hezz are over there creating more refugees. Make them pay for it.

Mikati made his billion dollars in Syria with Syrian money. Shouldn't he return the favour by helping those who made him rich? Just a question....

Dear Sir,
I am always impressed by the strong and valiant aptitude of press of lebanon filled with justice, virtue, righteous. Last I wrote I was so surprised by the fact FSA cased sever accident to lead wounded invloved persons, kidnapping, or conflicts persistently continue. I myself personally am impressed by admant efforts by the Miqati Cabinet honestly at heart. The heart of cabinet may have moved to help refugee as already accept so many Syrian from their land. To see Lebanese write to help syrian people even at this moment, I am so impressed.