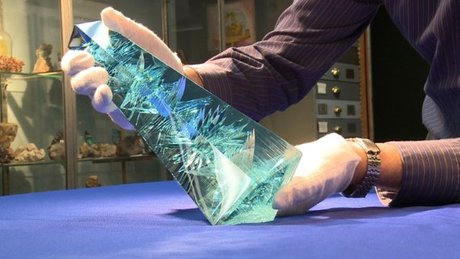 The largest single piece of cut-gem aquamarine in the world is going on permanent exhibition from Thursday in Washington alongside the Hope Diamond and Marie Antoinette's earrings.

Mined from a Brazilian pegmatite in the 1980s, and named for Brazil's first two emperors, the Dom Pedro Aquamarine will take pride of place at the National Museum of Natural History, part of the Smithsonian Institution.

"The quality of the original crystal and its size, exquisite blue-green color and distinctive cut make it an exceptionally rare gem," the museum said in a statement.

"The Dom Pedro Aquamarine represents a combination of an extraordinary crystal of rare clarity and rich color with the unique skills of a celebrated artist," said Jeffrey Post, curator of the museum's gem collection.

The Smithsonian Institution's collection of gems and minerals is one of the largest of its kind in the world, with the dark blue Hope Diamond -- donated in 1958 -- a big attraction at the National Museum of Natural History.