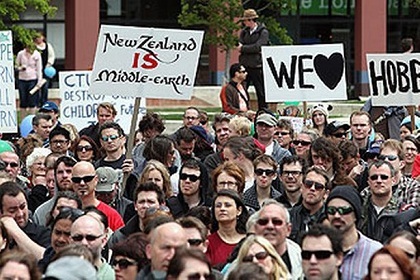 Two police officers were kicked "numerous times" and a woman was accused of stomping on a constable's head when protesters tried to force their way into Auckland's SkyCity building where the talks were taking place.

News media reports said up to 300 people squared off against 50 police and a handful of building security staff before setting fire to cardboard boxes near the doors of the conference center.

"Police staff moved in to prevent escalation and two officers were separated, attacked and kicked numerous times. Fire appliances were called to the scene to help," police said in a statement.

"Two arrests were made. One of these arrests was a female that stomped on a constable's head."

Protester Jax Taylor told Fairfax Media that the demonstrators wanted to present conference TPP officials with a petition protesting the secrecy of the negotiations but it quickly escalated out of control.

She said the group wanted to present a 750,000-signature petition to the head negotiator but when he refused to meet them things became heated.

"It was a bit dangerous," she said. "But if they'd just done what they said they were going to do by accepting the petition it wouldn't have got to that stage."

The Auckland meeting is the 15th round of talks involving 11 countries aimed at formalizing a Trans-Pacific Partnership free trade agreement.

About 500 negotiators from Australia, Brunei, Canada, Chile, Malaysia, Mexico, Peru, Singapore, the United States, Vietnam and New Zealand are involved in the meeting.

The talks have attracted controversy because of their secrecy and concerns a deal could extend corporate power into areas seen as national interests.