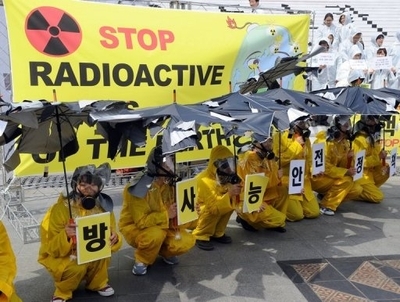 Greenpeace said Monday it had filed a lawsuit against the South Korean government for denying entry to half a dozen key campaigners and seeking to "silence" criticism of its nuclear policies.

The environmental group said it wanted recognition from the court that Seoul's decision to bar six Greenpeace staff was a violation of freedom of expression and international human rights.

The lawsuit also demands almost 70 million won ($65,000) in compensation for the disruption to the group's campaigning efforts.

"Following the Fukushima disaster, the South Korean government is trying to silence us for highlighting the tremendous risks nuclear power poses," Pino Lee, nuclear campaigner at Greenpeace East Asia, said in a statement.

"By unjustly prohibiting Greenpeace staff from entering Korea without reason, the government has created a chilling effect among those who wish to voice their concerns about nuclear power."

Greenpeace established an office in South Korea in 2011.

Since then the government has denied entry to four Greenpeace East Asia staff and in October turned back two Greenpeace International staff who were planning to attend a seminar on nuclear power in Seoul.

There has been growing concern in South Korea over the use of nuclear power after a series of scares and scandals.

The country's nuclear operator was forced to shut down two reactors at its Yeonggwang nuclear complex until at least January to replace components provided with fake quality certificates.

A third reactor was taken offline at the same complex when cracks were found on control rod tubes during maintenance work.

South Korea operates 23 nuclear power reactors which meet more than 35 percent of the country's electricity needs. It plans to build an additional 16 reactors by 2030.