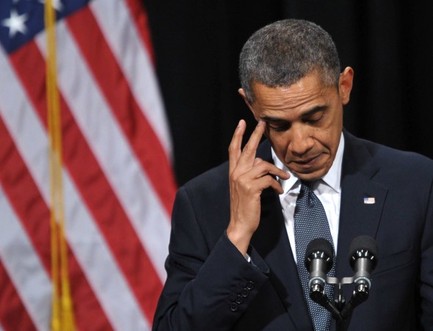 President Barack Obama on Tuesday threw his weight behind a bill to reintroduce a ban on civilians owning assault weapons, in the wake of a gun massacre in an elementary school that shocked the nation.

"He is actively supportive of, for example, Senator Feinstein's stated intent to revive a piece of legislation that would reinstate the assault weapons ban," Carney said, when asked what Obama would do about gun control.

A previous ten-year ban on military-style assault weapons was allowed to expire in 2004, and many U.S. citizens have since rushed to arm themselves with semi-automatic versions of rifles like the Kalashnikov or the AR-15.

On Friday, a 20-year-old man used a Bushmaster AR-15 assault rifle in an attack on a Connecticut elementary school, killing six staff and 20 children aged six or seven in a hail of high-velocity .223 rounds.

The slaughter has revived calls for stricter controls on arms in civilian hands, but Obama and Feinstein may encounter tough opposition from America's legions of shooting enthusiasts and a well-funded pro-gun lobby.

Obama has long supported a return of the assault weapons ban, but did nothing in his first term to put his own political muscle behind attempts to revive it.

America has suffered an epidemic of gun violence over the last three decades, including 62 mass shooting sprees since 1982, three of the deadliest in the second half of this year alone.

The vast majority of weapons used have been semi-automatic handguns or military-style assault weapons obtained legally by the killers.

There were an estimated 310 million non-military firearms in the United States as of 2009, one for each citizen. People in America are 20 times more likely to be killed by a gun than is someone in another developed country.