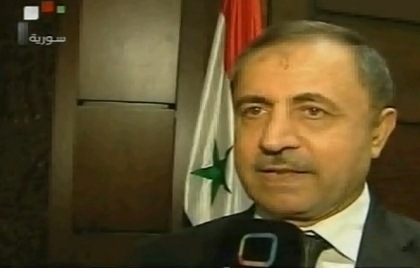 A Lebanese minister told Agence France Presse on condition of anonymity that al-Shaar arrived at 7:30 pm (1630 GMT) at Beirut airport, and he was taken to the American University Hospital.

"His condition is stable and he was able to talk to the people who received him at the airport. I don't know how long he will stay here," the minister said.

Future television reported that he was in need of large amounts of blood.

A security source told AFP on December 13 that the minister was wounded in a deadly bomb attack targeting his ministry on December 12 but his condition is not serious.

"He was wounded in the shoulder when the ceiling fell in his office," the source revealed, speaking on condition of anonymity.

"He was taken to hospital but his condition gives no cause for concern and he should be discharged rapidly,” it added.

It is the second time that the interior minister has been wounded in an attack.

Shaar narrowly escaped being killed in a spectacular July 18 bombing that claimed the lives of four other top security officials, including the defense minister and the brother-in-law of President Bashar Assad.

Arrêst the terrorist, he's wanted in the Netherlands for crime against humanity.

i guess world must be upside down when you work for propaganda unit.

Send him Aids infested blood if you can

He could live a normal life with the tri-therapy.... Infecting him with the Ebola virus would be much more efficient.

the filthy zionist scum trash and filth is getting more sick every day.

at least they move borders in something.

the filthy zionist scum trash and filth could not refrain from mentioning our glorious resistance in some stupid context.

These regimes are a disaster...they've been in power for decades but they do not even have ONE decent hospital that they can go to in Syria that they need to send them to Lebanon...I mean, ONE hospital, couldn't you get at least THAT right??

Yes they are a disaster but just remember that without the christians, lebanon would be too. Every good hospital we have is a christian hospital. So be grateful for that and give thanks where it belongs.

off topic, irrelevant and downright nasty statement, AUB hospital is "Christian"? what about all the Muslim doctors that work in all these hospitals? What makes something successful is not what religion they're from but how sincere and honest they are and thankfully there are sincere and honest people in all religions. Stop the hate.

that is a down right shameful thing to say.. and thats coming from a christian... there are plenty of muslim doctors in AUBH who are as good if not better than their christian counterparts... disgusting robert...

no no.. Syria had the best health systems.. the best educational systems.. and the best social security and pensions in the MENA region.. not to mention the second highest employment rate... what the people are revolting about i have no idea.. so due to the above.. this is all a US/Zionist conspiracy..lol

the filthy zionist scum is trying to be funny

Peace I was thinking that. Why does Chavez go to Cuba, Maher went to Russia, abnd why does this criminal go to Lebanon. That incident was last week. Aoun says the problem in Syria will be over on Tuesday 10 months ago. He should get treated in Syria.

Seems like the criminal axis killer don't put money in hospitals. Or maybe he needed to come to Lebanon.....so he can escape elsewhere later.

it's like saying that worms are flying. no you don't

the filthy zionist scum repeats itself

anyone else find it Ironic that he is at "American" University of Beirut Medical Center?

the filthy zionist scum trash and filth finds something to be ironic.

the most retarded zionist scum trash and filth now moved borders of idiotism again, claiming that assad regime will ask his genocidal entity for help.

the best end for him, would be to DIE in Lebanon, The Land where HE killed our true Patriotic politicians! you MF rot in hell

You and kiserwanimoughadram are a true Lebanese! you just made my day. Thank you ;)

ha! habibi I assure I only have one account. on a serious note, all your comments are from a person who is in desperate need of attention. You should probably find a better hobby where you can make friends or maybe even a girlfriend. Trust me, it's a much better way to pass the time.

Save his life, then put him on trial...

the filthy zionist scum hallucinate about putting our ally on trial

Is he considered a refugee from Syrian violence? If so send him to a tent in the Bekaa and let him have the amount of aid the Hezz are allowing other refugees.

i wish him long life in the hospital

maybe they are cleaning rockets we will send you?

I notice that M8 hasn't got the green light from their FPM politi bureau to comment this event... they're just paid propagandists.

well said! i was just thinking the same thing...

what an insecure creature

the filthy zionist scum is worried about who let one syrian in lebanon and who's paying medical bills.

why don't you worry about 40% of your people planning to leave your genocidal entity?