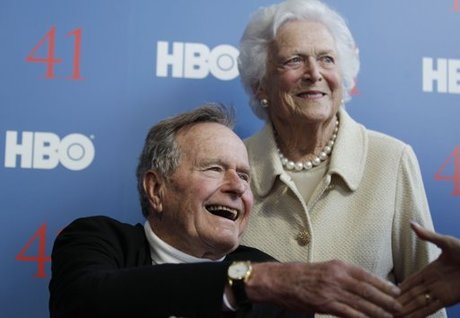 After more than a month in hospital battling bronchitis, former U.S. president George H.W. Bush has taken a turn for the worse and is in intensive care with a "stubborn fever," a spokesman said Wednesday.

"He's had a series of setbacks now that have landed him in guarded condition in the intensive care unit," spokesman Jim McGrath told Agence France Presse.

"Early last week it was really looking good, but then it seemed a couple of dominoes started falling and it was taking us in the wrong direction."

The 88-year-old was first admitted to Methodist Hospital in Houston on November 7 for bronchitis treatment and released on November 19. But he was readmitted on November 23 after his cough flared up once more.

Doctors had initially hoped to have the elder statesman home for Christmas, but he was instead forced to spend the holiday in the hospital, where he was joined by his wife Barbara, son Neil and grandson Pierce.

"I wouldn't say he was able to celebrate it in the traditional sense," McGrath said. "His family was with him, and he's conscious and he's able to engage in humorous banter with his doctor."

Bush, a Republican, served just a single term in the White House from 1989 to 1993, despite sending U.S. forces to victory in Iraq in the first Gulf War, expelling Saddam Hussein's forces from Kuwait.

He was seen as a moderate, low-key president compared to the showmen Ronald Reagan, who preceded him, and Bill Clinton, who followed, but respect for his hard-edged realism in foreign policy has grown since his defeat.

Domestically, he suffered a loss of support among his own conservative base after being forced to abandon his campaign vow: "Read my lips. No new taxes."

During his time in public service, he also served as vice president, congressman and director of the Central Intelligence Agency.

Although he was dogged by a reputation as a wimp and his standing suffered in difficult economic times for the United States, he heads an impressive political dynasty that may yet have a future in high office.

His son George W. Bush served two terms as president and also invaded Iraq, this time sending U.S.-led troops all the way to Baghdad to overthrow Saddam, whom he had wrongly accused of hoarding weapons of mass destruction.

Bush junior's term ended in 2008 on a low note with the economy in deep crisis, tens of thousands of U.S. troops still fighting in Iraq and the author of the 9/11 attacks, Osama Bin Laden, still at large.

But Bush senior's older son, George W. Bush's brother, former Florida governor Jeb Bush is still seen as an influential player within the Republican Party, and may one day launch a presidential bid of his own.

On December 12, while George H.W. Bush was already in hospital, he learned his granddaughter Jenna Bush Hager, daughter of George W. Bush, was pregnant with her first child. He was said to be "over the moon" about the news.