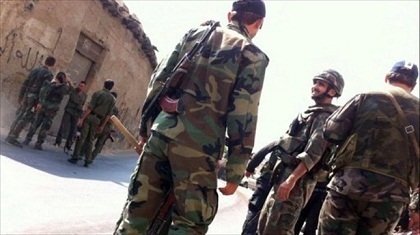 Forces loyal to Syria's President Bashar Assad on Saturday seized a district of the central city of Homs after a fierce assault that sparked a humanitarian crisis, a watchdog said.

"The army launched an offensive several days ago on the neighborhood of Deir Baalbeh with heavy bombing, and the fighting and attacks continued until the rebels withdrew," said the Syrian Observatory for Human Rights.

The Britain-based watchdog, which relies on a large network of activists and medics on the ground, said that several other rebel districts, long under siege by the army, were still holding the troops at bay.

It said that the fighting had triggered a humanitarian crisis in the city, referred to by anti-regime activists as "the capital of the revolution."

Homs, a longtime industrial heartland, was the target of a major army offensive in February that left 700 people killed, the majority civilians.

West of the city, the army also battered the rebel-controlled area around the Crac des Chevaliers crusader castle, a UNESCO-listed world heritage site.

In the northwest province of Idlib, clashes erupted for the fourth consecutive day between troops and rebels, mostly jihadist fighters, around Wadi Deif, the last military base under regime control in the area, the Observatory said.

Fighting also raged around Menagh military airport near Syria's second city of Aleppo, after rebels managed to penetrate the base on Thursday following a months-long siege, said the Observatory.

Assad's forces shelled farmland between Halab al-Jadida district and Mansura on the eastern outskirts of Aleppo, as warplanes overflew several towns in the north of the province.

Battles also erupted near an oil refinery in the northeast province of Raqa, where two rebels were killed, according to the watchdog.

Another two insurgents died in fighting in the eastern province of Deir Ezzor, which saw fierce battles in its provincial capital as fighter jets were sighted overhead.

Warplanes also launched raids on Kernaz in the central province of Hama, causing widespread destruction in the town, the Observatory said.

The Syrian Revolution General Commission (SRGC), a network of activists on the ground, said that the air strikes caused five homes to collapse on their inhabitants, leaving dozens of people injured.

Air strikes and artillery fire was also reported in several locations near Damascus, including Daraya to the southwest which the army has been trying to retake for several weeks, the Observatory said.

The SRGC reported clashes between the rebel Free Syrian Army and loyalist troops in the northeastern outskirts of the capital, while the army was targeting rebel strongholds in the Eastern Ghuta region with heavy mortar fire.

The Observatory said that 170 people -- 51 civilians, 62 rebels and 57 soldiers -- were killed on Friday in violence across Syria, where a pro-democracy uprising that erupted in March 2011 morphed into an armed insurgency after a bloody crackdown.

The watchdog puts the overall death toll from the conflict at more than 45,000.

He just came in his undies.

No, not happy ... just tired of the US-NATO-GCC propaganda characterizing the jihadist-civil war in Syria.

It seems several reversals of fortune enjoyed by Assad have come after the exposing of the Saqr-Hariri arms operation.

The West even the Saudis are becoming wary of the way the Salafists are carrying on in Syria ...

don t worry stupid FT... go back to sleep and shut up instead of wasting your time with void comments...

this is one small battle compared to the war that is being won by the FSA.

The problem with the assault on Damacus is that Israel wants no jihadists anywhere near its borders ... The US will make sure that this does not happen.

We see already support being pulled from the salafists because of the exposure of the Saqr Hariri operation. My take is that this could be a genuine turning point for Assad.

Should Assad retake and hold both Homs and Damascus this war could drag on for a year or two more. Already there are signs that the Aleppo battle has stagnated and could turn for Assad.

Then again this maybe Assad's effort to move operations closer to his Allawite stronghold in the mountains. The real point is that he has the confidence of enough troops and armaments to go on the attack.

As someone said earlier: stop using drugs, they are seriously affecting your vision :)

Dios mio.... the lebanese terrorist factions must be extatic. the dictator killed more people...
may God help them...

It is becoming apparent that Assad pursued a "scorched earth" strategy whereby he sought the evacuation of his own people through bombing cities to stop the jihadists and rebels from getting any cover or supplies.

Now he can go in and level any districts he needs to to root out the enemy without suffering too many casualties. This is exactly what Stalin did to the Nazis in Moscow. The scorched earth scenario.

I did say jihadists AND rebels ... And what good will it do the Syrian people ...

They get either Assad's fascism or Brotherhood Islamofacism ... they are screwed either way ...

Islamofascim a word invented by fox news that makes no logical sense. This is the first advance the government forces have made in months while the rebels have taken over most of Idlib province, everything north of Aleppo (and 80% of the city), the countryside of Hamah, almost all of the border with Turkey, half the border with Iraq and areas in and east of Damascus very close to the airport.

Both the main Damascus and Aleppo airports are under pressure now.

So they won a battle against an underarmed opponent. Hardly something to rejoice about. To try and classify this as anything more is pure desperation.