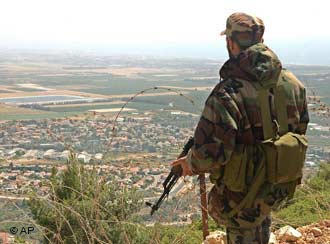 Hizbullah has been training Syrians from the Shiite sect in Lebanon's eastern Bekaa Valley to defend themselves against the rebel Free Syrian Army, sources told pan-Arab daily Asharq al-Awsat on Wednesday.

The Syrian Shiite sources said around 1,500 men are receiving salaries and being trained in the Bekaa camps to fight in Syria and defend Shiite villages and towns against the rebels.

The Hizbullah members are mainly spread in al-Zabadani and Reef Homs, specifically in the Christian town of Debleh, he said.

Al-Masri expected the area to witness heavy battles between rebels and pro-government gunmen backed by Hizbullah.

Reports that 5,000 members have been sent to Syria to fight alongside the army of Syrian President Bashar Assad are exaggerated, he said.

The Saudi al-Watan daily reported on Monday that some 5,000 Hizbullah members have been fighting alongside regime troops in the restive suburbs of Damascus.

report about something that nasrallah has openly said.

Actually not what he said. He said that hizbocrap was fighting in Syria but this report is that they're getting Syrians into Lebanon for training. Man do you even know how to read? So much for "resistance"...

how hypocrit hezbis are.... they call for disassociation and at the same time meddle in syrian affairs! LOL!

i was going to vomit.... this is the work of Syrian Army / Hezbollah.

You scum Farsi defending and commending terrorists! Get out of here!

LOL.....figures Farsi BSThrower pulls out of his hat of aliases ASSistance for his imaginary support fans.....what a pathetic loser! HA is going down boy just like Assad and your regressed followers.

Filthy militia. let them train all they want. they will all go down soon

If they are being trained to "defend" the village, then why are they receiving salaries? wouldn't that make them paid mercenaries?

"The Syrian Shiite sources said around 1,500 men are receiving salaries and being trained in the Bekaa camps to fight in Syria and defend Shiite villages and towns against the rebels."

Sidon93....good posts and to answer on his behalf >>>> 1) No he is NOT Lebanese but rather a regressed Farsi and 2) he is indeed a propaganda-addled shabiha moron.

Well, the Syrian Army is official, there are international treaties that forbid the government to torture and kill this way.

When I see this the first thing that come to mind is that Islamic countries should call the Jihad against Syria and the Vatican should call a Crusade against the butcher to protect the Christians.

ohh the irony "the weakest dogs bark the loudest" followed by "labbayka ya nasrocrap"....

"it was delightful to see those FSA being given a taste of what the lebanese tasted during syrian occupation."

yes and still defending those who did that to lebanese...bravo 3aleik... we see what you wish for lebanon: do the same to all the lebanese against you and your hezbi masters.

they infringe all international laws those you praise sissy boy... no army has the right to do that: it is call crime against humanity but i guess you don t care about laws, no wonder from a FPMer syrian baathist bootlicker....

you only deserve contempt sissy boy....