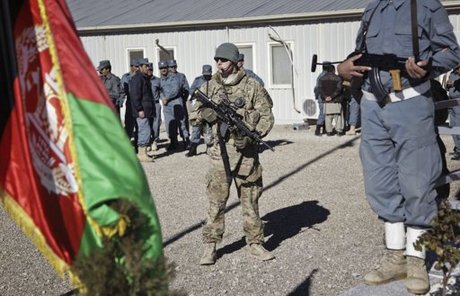 Seven Afghan civilians were killed Sunday after a NATO operation against insurgents in a central province which is a flashpoint for Taliban activity, officials said.

The U.S.-led NATO force said it was investigating allegations of civilian casualties after a military operation in which four insurgents were killed in Wardak province.

Local officials said the Taliban ambushed a group of coalition and Afghan troops from within a mosque shortly before dawn as they were returning from an operation to detain a rebel commander.

The troops returned fire and killed four insurgents, some of whom were wearing suicide vests, the provincial governor's office said in a statement.

After the coalition force withdrew, villagers entered the mosque to retrieve the bodies and "at this time an explosion happened in the mosque and seven civilians were killed.”

Shahidullah Shahid, a spokesman for the provincial administration, suggested the explosion "could be from one of the suicide vests or an IED (improvised bomb) at the mosque.”

Shahid did not give further details and said a delegation was investigating the incident.

NATO's International Security Assistance Force said ISAF and Afghan troops killed four insurgents after coming under fire, and also found and destroyed a weapons and explosives cache in the area.

A spokesman told Agence France Presse that ISAF was aware of the allegations that civilians had died and was investigating.

"We take all allegations of civilian casualties seriously," he said.

Some early reports alleged that a NATO air strike had been responsible for the deaths -- a charge denied by ISAF.

Civilian casualties caused in coalition operations are highly sensitive in Afghanistan, where the U.S. and its NATO allies have been fighting the Taliban for 11 years.

Afghan leaders say such incidents erode local support for the Western-backed government in Kabul and fuel the Taliban insurgency.