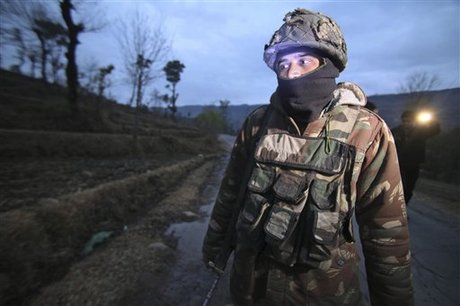 Pakistani and Indian military officials are due to meet on Monday at the border of divided Kashmir after soldiers from both sides were killed in cross-border attacks, officials said Sunday.

Pakistan has said two of its soldiers were killed in cross-border firing, one last Sunday and one on Thursday.

On Tuesday, India said two of its soldiers were killed by Pakistani troops and that one of them was beheaded in the disputed Himalayan region, which is claimed in full by both India and Pakistan but ruled in part by each.

"A brigade level flag meeting is likely to be held at LoC (Line of Control) tomorrow between Pakistan and Indian military authorities," a senior military official told Agence France Presse without giving details.

The United States has urged the nuclear-armed rivals to cool tensions along the heavily militarized border.

Kashmir, a Muslim-majority territory, has been the cause of two of three wars between India and Pakistan since independence from Britain in 1947.