Aoun Restates Orthodox Law Support: We Will Veto Any Proposal that Does not Assure Equality 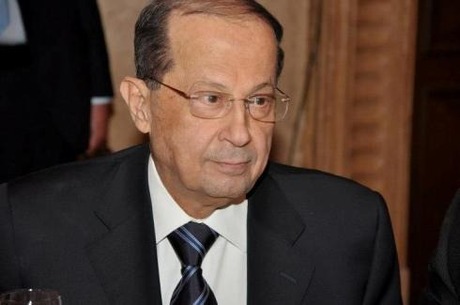 Free Patriotic Movement leader MP Michel Aoun restated on Tuesday his support for the Orthodox Gathering's electoral draft law, saying that he will veto any proposal that does not assure equality between Christians and Muslims.

"There is a Muslim domination over the Christian vote,” Aoun stated in an interview with OTV, adding that the Taif accord has granted Christians 64 deputies but they “never really elected their own lawmakers”.

The FPM leader said that there is a true elimination of Christians as "425,000 of them do not elect their own MPs or are not even represented”.

Responding to the critiques directed towards the Orthodox draft law, Aoun rejected describing it as unconstitutional, explaining that the Lebanese law itself divides the parliamentary seats on a sectarian basis.

"Only after he is elected a lawmaker becomes a representative of the entire nation,” he noted.

Aoun said: "As long as the situation in Lebanon is as it is we will not give up this law and if they want a civil state, we will form a board after the elections that would look into the type of regime we want”.

Commenting on March 14's Independent Christian leaders' opposition to this law, the FPM leader said: “They are nobodies and we will not give up just representation for them”.

Aoun addressed Progressive Socialist Party leader MP Walid Jumblat, saying that he only rejects the Orthodox proposal because it does not suit his interests.

"Why demand the elimination of sectarianism in the electoral law while we do not even have unity in other fields like education?” Aoun asked.

“The proposal that divides Lebanon into 50 electoral districts did not pass in the parliamentary committees' talks while 6 out of 8 blocs supported the Orthodox law,” he said.

The Christian four-party committee on the electoral law had agreed to endorse the electoral system proposed by the so-called Orthodox Gathering, under which each sect would elect its own lawmakers.

Discussing the situation of Syrian refugees in Lebanon, Aoun said: “Lebanon cannot handle this flow of refugees and it has become an alarming problem of overpopulation”.

"We have told (Prime Minister Najib) Miqati that he cannot disassociate himself or the cabinet from counting the number of refugees and from deploying security forces on the border,” Aoun noted.

"Assad's regime will not fall and they will end up communicating and holding national dialogue to find a solution for the current situation,” he said.

According to the latest report issued by the United Nations High Commissioner for Refugees, more than 200,000 Syrian refugees have fled the bloody conflict in their home country for Lebanon since the eruption of the neighboring country's war.

The government has been distancing itself from the uprising in Syria which started as peaceful demonstrations against President Bashar Assad's regime but turned into a bloody crackdown that has so far led to 60,000 deaths.

How do you measure honor ya leymoune.By running away leaving your soldiers to get killed,Or by running against the father of a killed son in metn,Or by becoming allies with qawme souri who killed our bashir,Or
etc.......

any figure talking to his 'media'--this means EVERYBODY.

anything he says is worthless--no different in the US if Fox News is 'interviewing' a Republican, Harriri being interviewed by FTV, or Hassoun being interview by Al-Manar. Soft question, canned answers--all propaganda all of the time.

Well let's see what's gonna happen next this might be getting very interesting !!!

Taif remains the best interim solution. 50-50 Christian Moslem with a de facto Muslim majority where Muslim votes are needed to elect the balance of the Christian deputies. The Christians do not have 50% of the population, but are allotted 50% of the seats so that, if the Orthodox plan is adopted, Christians have more than "one-man, one-vote".
Aoun and Hezbollah are playing with fire trying to upset the de facto balance that has been drawn. At most the Christian politicians should be working toward an electoral law where 35% of the Christian deputies are elected in Christian majority districts; and 15% can be elected in Moslem majority districts.

Dont waste money on this shit. Satan will take care of him !

you show me on place where I said anything about Samir Geagea. I SAID LEBANESE FORCES. Although Geagea won many battles under Bachir Gemail's command that is besides the point. Everything I stated speaks to te Lebanese forces and Kataeb as an organization. Lets compare that to FPM. Their greatest accomplishment has been to hi-jack the color orange. Dear GOD how can anyone ever compare to that? thinking back now I totaly agree with you. I mean how can anyone compete with Claoun's FPM after such a monnumental accomplishment. Please do accept my appologies! what a dipstick

Well said kiserwanimoughadram on all accounts !

I remember the time when FPM supporters used to claim that their movement was not sectarian, that Aoun was a national leader. HAHA. At least there's no more of this BS.

Look regardless of wether any of us like him or not, he was able along with other christian parties to agree on an electoral draft law which comes to us as a surprise bute it shouldn't because this means that all Christian leaders are coming to a realization stemming originally from a fear. A realization that Christians in Lebanon and within the next few decades will be disintegrating. This fear is bringing about a possible change in the rank of Christian leaders. I believe we have always been a sectarian country. This law will not change the likelihood of us being more sectarian. On the contrary i think this law will bring inner satisfaction to a lot of voters and in contrast you will see better relationships forming within our multicultural society.

Is this flamefarter a paid propagandist for FPM?

So much trash talk from M14 sypmathizers further adds proof to the well known fact that M14ers are lame and stupid. I believe this should be officially recognized as a sickness otherwise they will keep facing our well deserved prejudice.

Seriously Guys... Please stop attacking each other.
Its too delicate to sledge this hard.
FT, Karim and Lion, it would be brave of you to question Aoun regularly.
I have watched him toss and turn on things equally as much as Jumblatt..
Key difference, Jumblatt never attacks his own and never sold out his own.... Aoun is being played with too much false hope of his allies awarding him the chair... he is a failure and a disgrace and he will destroy anything and anything as he sinks... this is the truth.
I feel robbed of this maniac's actions since the late 80's. So should all his 'current' followers

Karim... you're a dirty person... Always posting the same old crap!
Get a an inch of life... you're too low... Always trying to stir tension among the Lebanese family by bringing up 'bad' things...
How about judging your preferred maniac! We all know he is the true maniac who can barely participate in a press conference without losing it.. Should we bring up his manic acts of the past??? I can type away all night you pig! FT you seem reasonable at time...:) Not often though

kitty- History speaks for itself. When your idol Claoun accomplish ONE thing in his life worth mentioning in the history books (other than getting smacked around all his life like a red headed stepchild by everyone) then you can earn the right to call others wankers. from where the rest of the world stands right now, the biggest wanker is claoun and the clounies.

I am living history you douchebag. I will NEVER hang my head in shame! I wear my pride on my sleeve of what the LF and Kataeb accomplishe. You want refresher you ungrateful dingbat. You wouldn't even be alive if it wasn't for the LF. The Christians were never supposed to survive in Lebanon. Our very survival is 100% direct result of the bravery and sacrifice of the LF. Go play somewhere else and kiss Aoun's rear end some more.

Without jumblatt there is no new law.