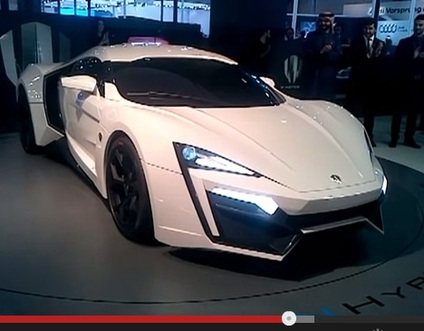 Sheikh Jawaan bin Hamad al-Thani, the son of Qatar's Emir, will be the first to own the priciest car in the world, the new Lebanese-designed Lykan Hypersport that was unveiled at the third Qatar International Motor Show.

Sheikh Jawaan chose black as the color for his new $3.5 million acquisition, that cultivated the title of the most expensive new car in the world, formally held by the Bugatti Veyron Super Sports.

Only seven LykanHypersport cars will be created this year.

Lebanese firm W Motors designed the supercar that features diamond-encrusted lights and potential buyers can sit back and enjoy the car's leather interior that is stitched with gold.

Despite its huge cost, the car is not as fast as the Veyron but the motor has an impressive 750 horsepower engine, reports added.

While the LykanHypersport does 0-60mph in 2.7 seconds, the Veyron does it in 2.5 seconds.

The car, first imagined by designer Ralph Debbas, who previously worked with Aston Martin, has taken six years to design.