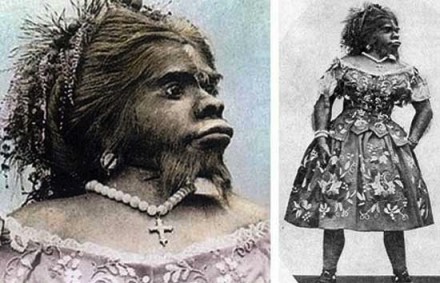 The remains of Julia Pastrana, a Mexican who was paraded in fairs and circuses as the "ape woman" in 19th century Europe, have returned home from Norway 153 years after her death.

Pastrana suffered from a rare disease -- congenital generalized hypertrichosis terminalis, or CGHT -- that covered her face and body with thick hair and gave her fat lips and gums.

Born in 1834, the woman, who measured 1.34 meters (four feet, five inches) and had a gift for dancing and singing, was brought to Europe by an American businessman to be shown in circuses and fairs.

She died in 1860 and her mummified body was acquired in 1921 by a Norwegian show promoter who displayed her remains in "freak" shows.

Her remains were handed to the University of Oslo in 1996. Authorities in her home state of Sinaloa, in northwestern Mexico, demanded that her remains be returned home.

A Mexican foreign ministry official said the body was already in Mexico and would be sent to Sinaloa for a proper burial.

It's disgusting that anyone would put this lady on display, dead or alive. She was a human being and should never have been humiliated.