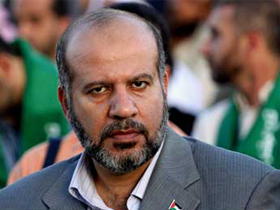 A Hamas parliamentary delegation of three MPs arrived in Bulgaria on Wednesday in a groundbreaking visit to a European Union member state, a delegate told Agence France Presse.

"We arrived today in Bulgaria on our first official visit and we will meet state officials, MPs from the ruling party and the opposition to discuss cooperation and explain the Palestinian cause," MP Ismail al-Ashkar said by phone from Sofia.

The EU lists Hamas, which controls the Gaza Strip, as a terrorist organization.

Members of the militant group last year visited non EU-member Switzerland to attend a hearing by a committee of the Inter-Parliamentary Union, drawing harsh criticism from Israel, with then-foreign minister Avigdor Lieberman calling the IPU invite "an example of international hypocrisy".

Ashkar said the trip to Bulgaria came in response to an invitation from cultural institutions which had set up several meetings as well as lectures at universities.

"There will be similar visits to foreign countries soon," he added, without giving further details.

The Hamas trip comes in the wake of a February 5 announcement by Sofia that the Lebanese Hizbullah was behind a July bombing in Bulgaria that killed five Israeli tourists and their local driver.