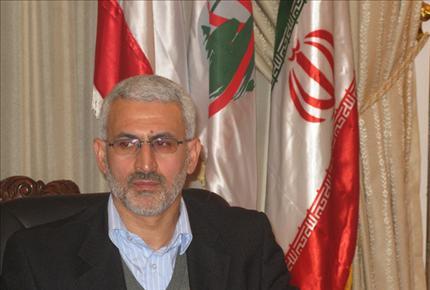 An Iranian official was killed on Wednesday overnight while on his way from Damascus to Beirut, the Iranian embassy in Lebanon said in a statement.

According to the statement, engineer Houssam Khosh Newes, an Iranian development official working in Lebanon, was killed by “armed terrorist groups” while he was returning to Beirut from the Syrian capital.

Media outlets reported that Khosh Newes was in the Syrian province of Aleppo evaluating development projects to reconstruct the northern city that is witnessing deadly clashes between the anti-regime rebels and the troops of Syrian President Bashar Assad.

Iranian Ambassador to Lebanon Ghazanfar Roknabadi considered that the “assassination” of Khosh Newe a proof that “Israel wants to topple any process of development" in the region.

He pledged that Iran will continue its efforts in this regards, stressing that “nothing will obstruct the reform process.”

Khosh Newes was appointed by Iranian President Mahmound Ahmadinejad in Lebanon after July 2006 war between Israel and Hizbullah, to help rebuild the south.

The war had cost the lives of 1,200 people in Lebanon, mainly civilians, and 160 Israelis, mostly soldiers.

In another report, Iran’s Fars news agency reported that a senior commander of the Revolutionary Guard was killed in Lebanon by “the Zionist regime,” without providing further details about the conditions of his death.

Media reports said that Iran and Hizbullah have played a role in supporting the Assad regime against the rebels since the outbreak of the revolt in March 2011.

Later on Thursday, Fahd al-Masri, spokesman for the Joint Command of the rebel Free Syrian Army, told Voice of Lebanon radio (100.5) that “Hassan Shateri and a number of his assistants were killed in the Israeli air raid on the Damascus suburb of Jamraya while he was overseeing the transfer of weapons and missiles to Lebanon."

The Syrian army said that an Israeli air strike targeted a military research center in Jamraya, near Damascus, on January 30 amid several media reports saying Israeli warplanes bombed a weapons convoy near the border with Lebanon.

Later, Israel implicitly confirmed it had staged an air strike on Syria, with Defense Minister Ehud Barak saying it was "another proof that when we say something we mean it."

But Masri said: "After he (Shateri) arrived in Damascus from Beirut, he immediately held several meetings with Iranian and Syrian security and military advisers, before he headed to Jamraya where he was killed.”

“The so-called (Iranian) Committee for the Reconstruction of Lebanon is a cover under which a number of Revolutionary Guard leaders, officers and members are operating in Lebanon,” Masri added.

However, the opposition-affiliated Syrian Observatory for Human Rights said Shateri was shot dead by rebels.

"We do not know exactly where he was shot, but we do know that a rebel group ambushed his vehicle while en route from Damascus to Beirut," the Britain-based Observatory director Rami Abdel Rahman told Agence France Presse.

Cited by Iranian media, Salehi said he "valued the selfless services of this commander of Islam and his tireless efforts in the reconstruction of the damaged areas in southern Lebanon."

yeah he was assessing rebuilding Aleppo, while fars news agency reported that this general was killed in Lebanon

No it is a bad news.. any human loss is a bad news. We need to apply on Earth wht God has teached us otherwise we are not better !
Chirstian

Thank for this justy action . Guud news not only for the Syrian and Lebanon,s peplle but for us Iranian.

An Iranian in Syriastan can only mean one thing, he had blood on his hands. May God forgive you, because the Syrians won't!

And it's just the begginning ...

Iran hijacked the Arab she3as and polarized the Arab Muslim communities because that is the only way for Iran to have a strong footing in our Arab region, hence the assassinations of rafic hariri and wesam Hassan not to mention what they did in iraq. Iran thrives on arab suni-she3i hatred and polarization, did Iran care to release the Lebanese in their swap with the FSA? No they did not precisely to keep the suni she3a animosity alive and kicking.

I guess they don't have 'jihadist' duties in Iran.

Good riddance to these odious people that have no place in Lebanon. Iran is the scourge of the earth and need to be neutralized-- someone has to do it before they cause more problems.

12 years after ending of your stupid civil war everthing known is forgotten. You become infinite inocent! Just like a tear.
All Lebanese who think abou revenge and blood are fools. The question is should a nation of fools prolong 10 years without another civil war.
You've got it gomming!

Once Syria gets rid of that lunatic at its helm the Iranians will rebel against those hypocritical clerics; the problem is Iranians in general are nasty people so whoever takes over will be just as bad and maybe even worse.

"what a load of bollocks eltigar, i'm amazed at the kind of crap you guys can pull"

said mowaten the voice of iran! unless he has been to iran and knows how the average iranian lives there. lol!

If and when the Iranian regime falls, anything that replaces it will be better for its people and for the region. Dare I say Iran also has a better chance of establishing true democracy than most Arab nations. The regime even imprisons and tortures clerics who oppose it, it does not represent Shia Islam as it was practised for centuries.

M14 losers deserve people who will destroy their towns and cities, not build them. RIP to the martyr.

Go live in Iran then!

"M14 losers deserve people who will destroy their towns and cities, not build them. RIP to the martyr"

the stupidest comment ever!!!!
so i guess destroying beirut does not matter as there are lots of M14 people living in it? LOL

you d better shut up instead of making yourself ridiculous and showing us the level of thinking of M8!!!!

I am an iranian.
I send you Guys Congratulation. Hope for your Freedom.
Best wishes

This man was the boss of the al quds brigades in Lebanon. A major blow to terrorism thanks to our FSA friends. Allah yi7mion.

Intersesting enough about the Iranian official killed in Syria allegedly on his way to Lebanon, but I found the second part of the article more interesting:
"In another report, Iran’s Fars news agency reported that a senior commander of the Revolutionary Guard was killed in Lebanon by “the Zionist regime,” without providing further details about the conditions of his death."
When and how did this happen? An explotion in Dahiye perhaps? And why are the iranian so low key about it? Perhaps this was not in Lebanon, but in the attack against the convoy of rockets to Hizbollah from Syria.

This is so important to them that they will let their own citizens starve just to keep the face among followers in Lebanon, Syria, Gaza etc. Which in turn will make their own population furious and causing a possible revolution in Teheran. The Iranians are in a catch22-situation. Damned if they do, damned if they dont. The arabs and the west should never pay a dime to rebuild after wars that the Iranians are behind in the first place.

i guess FT has been to iran to be so sure of himself concerning the well being of the average iranian citizen... or did he read that through sana or elmanar?

I am sure in FT's warped propaganda filled mind that losing 70% of your currency value has no effect on the economy. The religious and political rulers of that country want to resurrect the Persian empire, no matter the cost to its people.

who starts plans to rebuild in the middle of a war? seriously thats the best lie they could have come up with?

Mowaten you rejoiced when Hariri and Wissam el Hassan got killed!!!!!

Love waking up to great news, it shall be a good day.

LOL another idiotic comment! that is why israel fears that bashar loses! he is the best protector of the golan heights...never shot a single bullet towards israel but uses his heavy weaponry against his own people! yes a true resistant he is! LOL!!!!!!!!!!!!!!!!!!!!!!!!!!!!

lol mowaten... you cannot deny that bashar kept the syrian border with israel the quietest in the region! not a single bullet fired letting hezbis do the dirty work in lebanon while bashar keeps peace in syria!! and you support this man? you praise hezbis to go at war with israel from lebanon while your beloved bashar does not do a single thing.... true patriot you are indeed!
BIG LOL, shows how ridiculous you are!

I think all that all those that support Iran and Syria against Lebanon need to be banished to live there. As Lebanese we should not tolerate our own people taking sides against us by allying themselves to those crazy Islamic clerics in Iran and that psychopathic killer in Syria who is obviously out of touch.

Syria rebels say Iran commander was killed in Israel’s Jan 30 raid on Syria. Iran just wants to save face and Hezboallah are lying through there teeth.

Call them what you want, and even if the shaytan joins them, just as long as they hang the giraffe.

Well for future reference, next time don't travel off the beaten path.
Takbeer