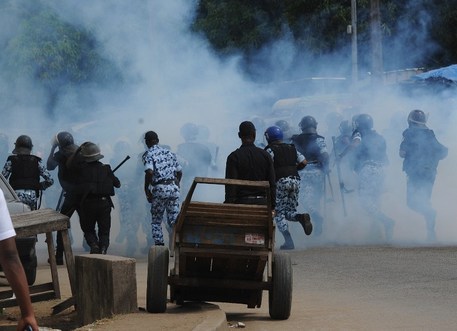 Fifty young people shouting "Free Gbagbo" were pushed back while they tried to charge a barrier set up by police, who fired tear gas and caused the protesters to disperse before they reached Yopougan square, in a part of Abidjan that has long been a pro-Gbagbo stronghold.

Police, equipped with riot gear, sealed off the square, while a strong contingent of the UN's Ivory Coast operation blocked the main road leading to the demonstration with the help of four-wheel drives and armored vehicles.

Traffic resumed around the square after a few minutes of disruption.

Gbagbo, who first came to power in 2000, refused a decade later to acknowledge defeat by Alassane Ouattara in a presidential election, triggering a bloody showdown that lasted from December 2010 to April 2011, when Gbagbo was ousted at the cost of some 3,000 lives.

The former head of state has since 2011 been held by the International Criminal Court in The Hague, where he has been charged with crimes against humanity.

In a statement broadcast on state television RTI on Friday night, Interior Minister Hamed Bakayoko endorsed the protest ban, because of the "risk of serious misbehavior". He also warned that police would be present to ensure the ban was respected.

The youth-wing of Gbagbo's party, the Ivorian Popular Front (FPI), staged the protest to demand the release of the former head of state.