Miqati Renews Condemnation of UNIFIL Attack: It is Aimed at Destabilizing Lebanon 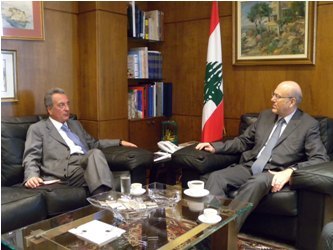 Prime Minister-designate Najib Miqati condemned on Monday the attack against a U.N. Interim Force in Lebanon on Friday, stressing the important role the Italian contingent plays in the international force.

He said after holding talks with Italian Ambassador to Lebanon Giuseppe Morabito: “The attack was primarily aimed at destabilizing Lebanon.”

He also hoped that the attack would not affect Italy’s participation in UNIFIL and its ties with Lebanon.