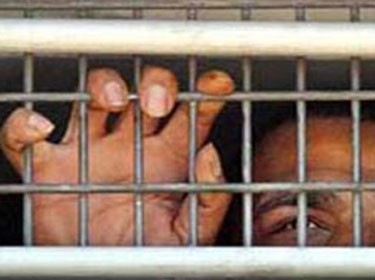 Some 3,000 Palestinians held in Israeli jails were staging a one-day hunger strike Sunday in protest at the death of an inmate, an official said, as security forces clashed with demonstrators in the West Bank.

Arafat Jaradat, a 30-year-old father of two, from the village of Sair near Hebron in the southern West Bank, died suddenly on Saturday in an Israeli jail from what prison authorities said appeared to have been cardiac arrest.

Protesters in his home village and in different parts of Hebron city on Sunday hurled stones at Israeli security forces who responded with tear gas and stun grenades, witnesses said. There were no immediate reports of injuries.

Media said Israeli security forces were on the standby in case of further demonstrations.

"The security establishment as a whole and the prisons service in particular are on a heightened state of alert today," said Maariv daily.

The Palestinian Prisoners' Club meanwhile said the number of inmates on open-ended hunger strike had climbed to 11 from four.

Jaradat's death came a day after nearly 100 Palestinians were wounded in clashes with Israeli security forces during demonstrations in the West Bank to demand the release of the hunger strikers.

An autopsy was due to take place at Israel's national forensic institute on Sunday and Issa Qaraqaa, the Palestinian minister in charge of prisoner affairs, said a Palestinian doctor and Jaradat family members would be present.

A statement from the office of Palestinian prime minister Salam Fayyad on Saturday said he "expresses his deep sorrow and shock over the martyrdom of prisoner Arafat Jaradat in Israeli occupation prisons".

He "affirms the need to promptly disclose the true reasons that led to his martyrdom", it added.

The Islamist Hamas rulers of the Gaza Strip said the prisoner had died because of "the inhuman conditions in Israeli jails".

Israel's Shin Bet internal intelligence service said Jaradat had been arrested on Monday for his involvement in a stonethrowing incident in November 2012 during which an Israeli had been injured.

"After lunch, as he was resting in Megiddo prison, Arafat Jaradat was taken ill. Medics were called to treat him but they were unable to save his life," it added. Israeli police were now probing Jaradat's death.

Israeli rights group B'Tselem said the investigation should look at how he was treated during interrogation and what techniques had been used.

It should be "independent, effective and transparent, and be finalized swiftly", it said in a statement issued late on Saturday.

Relations between Israel and the Palestinians are already tense because of a rising wave of protests in solidarity with four other prisoners detained by Israel who have been on hunger strike for some months.

The Ramallah-based Prisoners' Club announced that another seven prisoners had joined them.

"The Prisoners' Club does not know exactly when they started their hunger strike. The lawyers who are going to visit them will get more details," spokesman Amani Sarahna told AFP.

He said Muna Qaadan, a sister of Tareq Qaadan who has gone without food on and off for several months, was among those who joined the action. She had been freed in October 2011 under a prisoner exchange but since re-arrested.

The fate of Palestinian prisoners, and in particular the hunger strikers, has sparked protests across the Palestinian territories and raised international concern.