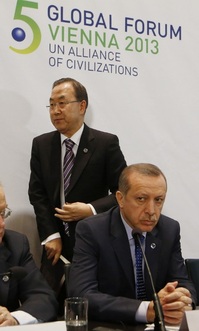 The lack of clear leader among Syria's opposition is no reason to maintain support for the "cruel" regime of President Bashar Assad, Turkey's prime minister said Wednesday.

"The international community thus far unfortunately has not taken the kind of position it was expected to take," Recep Tayyip Erdogan said at a U.N. event in Vienna.

"Some countries ask who will replace Assad when he leaves. I always say that major events, major revolutions, bring their own leaders," he said through an interpreter at a news conference.

"Sometimes leaders are instrumental in bringing about major developments or revolutions," he said.

"The struggle of the opposition is important and should be appreciated. Their effort is the way to prepare the ground for a democratic process to take hold for the Syrian people."

Early in the ongoing two-year revolt against Assad's regime, Turkey broke ties with Damascus. It led international calls for Assad's ouster, has offered shelter to defectors from the army and hosted opposition meetings.

Turkey will host this weekend a meeting in Istanbul of the main opposition National Coalition aimed at electing a "prime minister" and government to run parts of the rebel-controlled country.

Analysts say the move will help the opposition-in-exile gain credibility with Syrians inside the country and the international community, and also catch up with well-established Islamist groups.

Erdogan repeated Wednesday that he believes the Assad regime's days were numbered.

"The Syrian people are fighting for their freedom ... Sooner or later this aggressor, this cruel, autocratic regime of Assad and his followers, will go. It will not be possible for them to remain," he said.

Ban said in a speech that in Syria he is "extremely concerned about the risk of sectarian violence and mass reprisals as the situation continues to worsen."

The emir of Qatar, Sheikh Hamad bin Khalifa al-Thani, also present, said that a "genocide" was being carried in Syria by a government "that has lost all legitimacy".

The UNAOC, founded in 2005, aims to "forge collective political will and to mobilize concerted action aimed at improving cross-cultural understanding and cooperation among countries, peoples and communities."