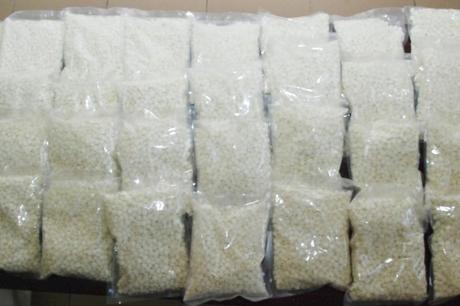 The security forces on Tuesday seized more than one million Captagon pills in a valley in the Bekaa region, reportedly worth millions of U.S. dollars.

The Directorate General of Internal Security Forces issued a communique explaining that a police force raided the valley on Monday upon information received and investigated by the Bekaa anti-drug bureau.

"The Captagon pills were found in 12 burlap bags, hidden inside a dried up mud pool,” the communique detailed, adding that they were readied to be exported.

The bags were transferred to the anti-drug bureau and investigation is currently underway to reveal and arrest those involved in this case, the ISF's statement said.

In 2012, the security forces launched a mission to destruct cannabis crops in the Bekaa region amid protests from local residents.

Seventeen tractors were involved in the destruction of the fields that measure up to 300 dunums.

However, the residents of the Bekaa town of al-Yammouneh staged in August 2012 a sit-in in protest against the destruction of cannabis crops in the region.

This is poison.... I tried it once and it was incompatible with my thyroid treatment pills. It nearly killed me!

Allegiance to the wall (Jews) or .wali, as in Waligator from i-ran?

They need those pills to keep beating their chests. Filth begets filth

andre_jabbour, you must have bought the pill designed to kill M14ers (they have blue print on them. You should try the one with the yellow/orange label, these are safe for consumption.

Haha, nice nickname but too cute for the terrorists they are.

Here is another shocker! FPM supporters want to legalize drugs. That way they can justify their alliance with HA. Pathetic at best!

Please i will like to know the prices of Captagon pills and how many of them are in one box.Thanks