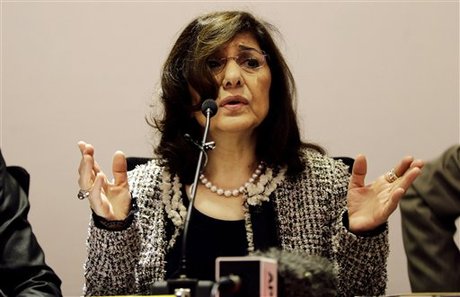 Syria's President Bashar Assad on Saturday called on the BRICS nations to intervene to end the conflict in his country, in a letter delivered by his adviser Bouthaina Shaaban during a trip to South Africa.

Speaking to Agence France Presse, Shaaban said she had delivered the letter to South African President Jacob Zuma ahead of the BRICS summit in South Africa on March 26.

"Today I passed a message from President Bashar Assad to President Jacob Zuma, who will preside over the March 26 BRICS summit, on the subject of the situation in Syria," Shaaban said, reached by telephone from Beirut.

"In this message, President Bashar Assad asks for intervention by the BRICS to stop the violence in his country and encourage the opening of a dialogue, which he wishes to start."

Shaaban said during the meeting with Zuma, which was also attended by South Africa's foreign minister, "the president was very positive and deplored the destruction affecting this beautiful country."

The BRICS acronym refers to the nations of Brazil, Russia, India, China and South Africa, all developing powers which opposed the use of force in Libya.

they keep saying that everything is under control... why would they need foreign intervention...?

True. Your analysis, in my opinion, would be more complete if it is directed towards "extremism" on all sides. Unfortunately, our region has been in chaos and the various cultures have been killing each other for more than 1,800 B.C. One Culture in particular survived for 450 years or so from about 1,600 to 1,850 B.C. and somewhat brought them together and maintained peace by force (because they had to), diplomacy, education, social and religious tolerance, etc. but at the end these same players who are killing each other today where determined to bring their end which they did, for its nation, but its people survived until today. We are doing very, very well wherever we call home today.

satanic develop worshiping wahabis did not come until the 17 century, when the devil born the satanist abdul wahab, whose "religious movement" went on to become on of the most, if not the most, vile cult in the history of humanity.

You know, call me vindictive, or call me mean, but this lady has always represnted to me the ultimate image of the syrian regime, contempt and arrogance towards others, especially the Lebanese people. I am really glad to see her looking so dishelved and distraught and her hands out begging for help. How often did this lady and her cronies cry for the Lebanese people who went through their own hell for decades? They looked at us as if we are vermins. Ah how they wish they were us today!

hey ghada 12
A person can be arrogant when the person across from him or her is stupid
Our Lebanese leaders SOLD their soul and allowed them to pyt the lebanese thru hell
Don't blame her, it is us and our leaders who sold us down the drain

I agree with you too abraham.

I call you very smart...

I aggree with you Ghada12

The extremest are NOT going to take the country... stupid Iranian/USA scare tactic...

how come on an earlier story they put a profile picture

it doesn't matter abraham, I just like looking at it

British and France recently announced that they will work to begin shipping arms to the anti-Assad forces. For years all extremists and car bombs originated from Syria under the umbrella of the Syrian regime. All Syrian politicians died in the same fashion (i.e. committed suicide). Assad same as Gadafi and Saddam will not bail out w/o being taken down.

BRICS is the other side of the scale vs NATO you Inglorious Bastards. Russia China India South Africa and Brasil Vs NATO forces who just go to a country steal all their resources and gets the job done by killing civilians. Libya , Gaddafhi was indeed a dictator, but why remember him after 32 years O.o . Assaad Regime more than 27 years, why remember them now? You shouldn't discuss politics if you don't think about what i just said mate

he must be desperate ..he is loosing ground to the rebels daily

She will go down with Bashar at the same time....shame on her...

She'll never make it to jail....she'll hang right next to the hyena...

Who are you "resisting"? How divine was your "victory".....you take your money and your orders from Iran, and you hold Lebanon hostage. You think people are stupid, but it is you, who is stupid, and once Bashar goes, Nasrallah and his boys will be next...

hey tonyfarris
you wish I was Iranian
My friend I'm Lebanese Christian, with a bit of brain unlike you
I don't follow any of the corript leaders like you do blindly

SORRY abraham but yes you DO, I don't follow anything any Lebanese Leaders because they are ALLLLLLLLL corrupt ....

Its really simple boys and girls... Iran (Leadership) helped the Americans get rid of Saddam Hussein, The Syrian Regime is (was) the Northern Israeli Protector and amongst other examples I really believe now Hizb and Israel co-ordinated the exit of Israeli forces from the south back in 2000 for Hizb to gain political power in lebanon to control as did Assad controlled Syria...and Finally just like 911 was 2006 was an orchestrated show war for lebanon... which also saw the UN become a resident in the south. Israel now, because of Hizbshitan, now feels safe.
Oh, and please who ever wants to criticize me for been an M14er (i am with a lot reservations) I know that the GCC countries are as equally guilty of helping the Zionist.
There is the TRUTH (God knows what it is) and then there is hypocrisy from EVERYWHERE which will fail.

lebcan, absolutely correct, a hundred percent, not an iota of doubt in my mind. we are continually fed a bunch of nonsense from all sides while they all work together to maintain their status quo or bid for power or even just simple war profiteering. All a show. I have even read that the some poor rebels in syria are so ingenious and true to their cause that they are making their own munition by mixing salt and lemon! Please! arms are flowing from all sides to make sure that this war continues until all the powers from all sides are satisfied that their needs have been met! meanwhile the people suffer.

eh bonanza duh to you! some of us takes us a little while! no shame in that!