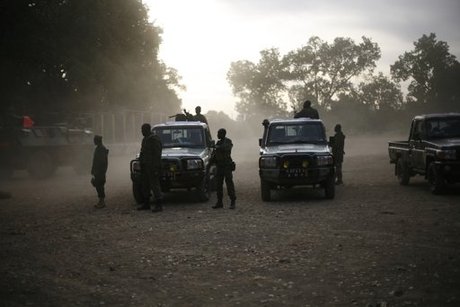 One of the main armed Islamist groups in northern Mali claimed responsibility Friday for a suicide bombing and armed assault on Timbuktu which left one soldier and 12 militants dead.

The al-Qaida-linked Movement for Oneness and Jihad in West Africa (MUJAO) said Thursday's attacks on the desert city it had controlled for seven months before being ousted had "opened a new front" in the conflict with Malian troops.

"On behalf of all the mujahedeen, the MUJAO claims the bombing and the attack of Timbuktu... We have opened a new front in Timbuktu, and we will continue," MUJAO spokesman Adnan Abu Al Walid Sahraoui told Agence France Presse.

He said militants were back in Gao, Kidal and Timbuktu, the capitals of the three regions of northern Mali, "and they will continue fighting, thanks to Allah".

"The French are our enemies but those who work with them are also our enemies," he added.

French and Malian troops liberated the three cities in January from the grip of armed Islamist groups, including al-Qaida in the Islamic Maghreb (AQIM), which had controlled northern Mali since June, committing atrocities and destroying Muslim shrines in the name of sharia Islamic law.

Thursday's raid on Timbuktu, the first since the liberation of the fabled desert city 900 kilometers (560 miles) from the capital Bamako, began with a militant exploding a suicide belt in a car at the airport, killing a Malian soldier and wounding at least two others, according to a Malian military source.

French army staff said "a dozen" Islamist fighters were killed by "French and Malian forces" during the clashes which followed.

In addition, several Malian soldiers were wounded by "friendly fire" from the French army.

The city had been calm since its liberation, unlike the northeastern city of Gao which has been hit by several suicide bombings and guerrilla attacks since the Islamists were driven out.

Fighting in recent weeks has been concentrated in the Ifoghas mountains in the extreme northeast of the country where French and Chadian soldiers are trying to flush out lingering groups of rebels.