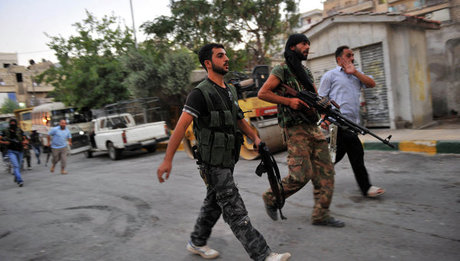 The Saudi Interior Ministry warned on Monday that Saudis fighting in Syria will be arrested when they return home.

Al-Turki said authorities will also crack down on those planning to travel to Syria to join the fighting there and that some Saudis who joined the Syrian conflict have already fought for al-Qaida outside the kingdom.

He also commented on last week's arrest of an 18-member spying ring in the kingdom.

The ministry has said the detainees included an Iranian, a Lebanese and 16 Saudis who were suspected of "gathering information about vital installations and locations."

Iran denied any involvement in the case. Al-Turki said the kingdom did not implicate any specific country.

No Ft , they give a "House " arrest with full salary benefits to all his family ...bloody wahibist influence are everywhere now , we've been saying that all along !!!

Are you kidding me
IS aI-TURKIE serious
he must be kidding
No way A Saudi man fighting in Syria
17 of the 19 bombers of 9/11 weren't from S. Arabia
No way

Saudi Arabia is the financial driving force behind every terrorist group in Syria. There are more Saudi salafis killed in the Syrian conflict than any other nationality. This is nothing more than a pathetic media stunt.