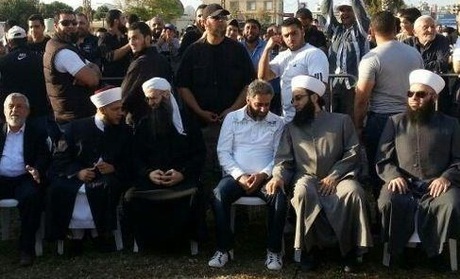 The sit-in caused traffic jam on the seaside highway, amid the return of holidaymakers from the South, the agency noted.

He urged the Lebanese army “not to facilitate the crossing of Hizbullah fighters into Syrian territory.”

Asir called on supporters to stage another sit-in at the roundabout after the Isha prayer and to rally on Friday after noon prayers outside the Hizbullah-affiliated al-Zahraa Complex in Sidon.

The protest was held under the slogan “Against the Weapons and Apartments of Strife.” Asir has accused Hizbullah of “renting apartments” in the vicinity of his mosque in the Sidon suburb of Abra with the aim of “monitoring” his movements.

Hizbullah chief Sayyed Hassan Nasrallah has hinted that the party will not tolerate the evacuation of any of its offices in Sidon and its suburbs.

“Thousands of Shiites have been residing in Sidon since hundreds of years, do they need a permission now? We were among those who fought to liberate Sidon and the South and we have offices, houses, mosques and complexes in Sidon since 30 years," Nasrallah said.

he has got a point why is ha fighting in syria?

Banthepoofs what do you mean when you say " only Ali knows" , don't you mean "Mohammad " , maybe you should rephrase your post !!!

Ha will bring death and destruction upon its community for no logical reason. What is the interest of the she3a Lebanese to go to war with millions of Syrians? It is purely Iranian interest and the she3a Are hostage. Too late now anyway, the easiest thing is to start a fire, the hardest thing is to put it out.

What kind of lawlessness is this, those are not Shiites so they have no right to block roads.

why are the shia hostage they know right from wrong? but they think its a jihadi duty to protect bashar. If this was a real resistance they wouldnt be fighting in syria

“Against the Weapons and Apartments of Strife.” jajajaja apartments... very funny.

I wasn't aware that Hizballa was around for hundreds of years.... wat a liar this Nosralla is.

I don't see them with strapped on vests...

He sees HA breaking laws and he is doing the same. I am not saying he is right (on the contrary, he is at least equally as bad as them) , but HA is setting a bad example and giving others the opportunity to break laws without penalty.

Why is sheikh Ahmed , equally as bad as them. How can you compare a man is protesting until this moment peacefully with a terrorist group such as hezb Iran which has blood of innocent people on it's hands, first Lebanese and now Syrians. Be fair in your comparison. You don't have to like the person but I'm pretty sure if you listen to what he is saying. You will agree with him on many points. Or is just because he has a beard and all the Hollywood stereotypes people have been brainwashed with

Lawlessness leads to more lawlessness. HA may be triggering it, but if all people start doing the same, there is nothing but chaos and all of us are worse off. I never said HA were saints, but neither are the actions of Asir. He is supposedly from Saida yet closed off the road this past summer harming his fellow townsman and merchants in the area. People like him aren't helping his fellow citizens, and neither are the thugs from HA. They just want to cling on to power and be relevant somehow.

"Power is the ultimate aphrodisiac"--Henry Kissinger

Too many ideologies, too many psycho maniacs, too much unemployment and idle time that allows the devil plenty opportunity to fill the vacuum. Not just Asir and his supporters, also HA.

It should be made law that all religious leaders not part take in any politics or political parties. All their involvement does is create a power vacuum that mixes religious beliefs with current life struggles that individuals face creating extremists that take command and are manipulated spiritually by the religious leaders. Men of faith should be just that, not thugs that get their supporters to block highways causing interpretation to other peoples life. The sooner all these clerics conduct themselves in a peaceful manner promoting love, peace and forgiveness as they are obligated to do the better off we will all be.

He's holding a protest under the slogan "Against strife" lol. His only stable source of income is his recruitment by the Saudi embassy to do nothing BUT cause strife.

Asir you are a branch of radical Islam, we all know what you are after , go and shave your beard off , not all but half on one side .. You are a smelly Sh..T creating havoc in Lebanon sponsored by the KSA / Harrri clan !! Long live HA , Long Live HA , you will never ever have a say in Lebanese politics , ever ,!!!! Keep on licking you KSA / Harriri's D...Ks, that is all you are just a sucker !!!! Hope we will be at your funeral soon !! See you then ..