Safieddine: Our Stance in Syria a Strength for Resistance, We'll Emerge Victorious 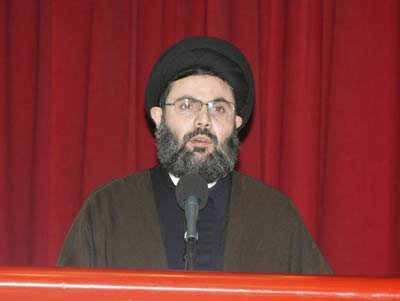 Head of Hizbullah's Executive Council Sheikh Hashem Safieddine on Sunday announced that his party's military involvement in the Syrian conflict is a “strength for the resistance,” stressing that it is not of a sectarian nature.

“It is the same battle, the same cause and the same objective, and like we triumphed there (in southern Lebanon), we will emerge victorious from all these confrontations,” the top Hizbullah official vowed.

Safieddine stressed that his party's stance on Syria has never been sectarian “like some ignorant people are claiming, but rather patriotic and nationalistic, and aimed at preserving Palestine, the Ummah's strategic cause, and the unity, immunity and strength of the Ummah.”

“The resistance defended its country, people and cause through its weapons and today it is defending its cause as well as its people and country,” the Hizbullah official added.

He warned that “the American scheme in Syria is not different than the scheme of targeting Lebanon,” adding that “the U.S. role has always been to stir sedition in our country.”

“It is very normal that our stance is to confront this American-Western scheme and it is very normal for the resistance … to preserve its achievements like it preserved its weapons, freedom and decision in July 2006 through blood, martyrs, patience and sacrifices,” Safieddine added.

He stressed that Hizbullah is “fully prepared to preserve this resistance in this new confrontation and it is also prepared in the face of the enemies who are amassing and threatening us everyday.”

Turning to the issue of the drone shot down by Israel over Haifa, Safieddine said: “Days ago, the Israeli enemy launched threats under the excuse of a drone that flied (in its airspace), although it totally knows that its threats are empty and meaningless.”

“If it thinks or imagines that Hizbullah is now preoccupied with the Syrian affair, it must totally realize that what's happening in Syria has never took our attention from our resistance against Israel and from our readiness and preparedness,” Safieddine added.

“We are totally prepared to confront and defeat the Israeli enemy should it think of committing any foolishness,” he said.

“Today, we are at the highest levels of preparedness on our frontier in the South, because we believe that what's happening in Syria is targeted against the resistance, which must always be strong.”

and I'm sick of the word 'resistance'

I like to read the comments of the geniuses above who compare the man to a monkey. A long time ago a handsome man who was once president ridiculed the Syrians by calling them graduates of sa3sa3. Little did we know that the sa3sa3atians crushed the skulls of the brilliant Lebanese with their boots for over 30 years. I wonder how many found that amusing and were laughing at his humor then as well as now.

evil cancer that needs to be eradicated .

u r a racist! i may insult people every now and then but you are much worse!

ft nd mowaten
what have you to say about this?
is there a clearer information about the target of your supported militia? and coming from the mouth of your turbaned man!
it is all about a militia trying desperately to preserve itself against the state of Lebanon.

the world according to micho aoun is a sad place indeed.. marquis de sad wouldn't have preferred any other way..

FT dont you feel like an idiot when they say one thing and another?i thought they were not involved in Syria..do you need any more proof then when one of there own admits to it?stop blaming others of been involved..as lebanese we should just protect our borders before it is too late .

FT stop making excuses of nusra and others in syria..you are delusional,they haven't threatened lebanon and they can not threaten us if we are united ..let you hizb keep doing other countries dirty work and we will see where they will end up..they keep making enemies and soon will have no friends left.

FT don't you think by fighting you enemy and there is a chance of loosing ,then you are inviting them to lebanon?

FT i prefer any alternative to the current Syrian regime .i can't see the difference between them and an Islamist syria..they are both destructive ..get out of your cave and look back to see what the Syrian regime done to Lebanon in the last 30 years ..and they still don't recognize Lebanon's existence..so who is delusional?

FT-allying yourself or supporting someone that allies themselves with the current regime is dfinately a sign of someone who "also prefer an alternative to the current syrian regime". Clearly!

he is correct ,by saying they are protecting there weapons.when assad goes so will the hizb as there supply lines are gone .hopefully very soon

Hizbollah has defeated Israel twice - in May 2000, and July 2006. Syria was losing to rebels. Now Hizbollah has decided to fight those extremists sent in by Saudis and Qatris. It was an Israeli project to remove Assad and install a Zionist-friendly puppet in Damascus. But now this plan has failed thanks to Hizbollah. Takrifis after defeat will turn on Saudi Arabia and Jordan.