ISF: Mastermind Behind Abduction of Estonians Arrested, Had al-Qaida links 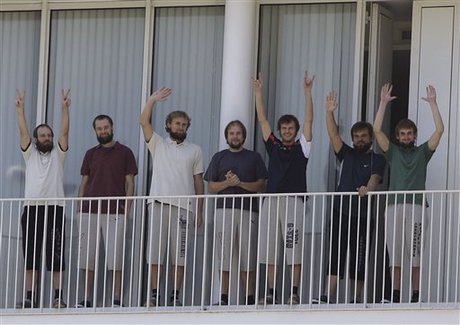 The Internal Security Forces revealed that it detained the mastermind who plotted the kidnapping of the seven Estonians in 2011 at the behest of al-Qaida cadre in Iraq, the ISF General Directorate said on Thursday.

In a communique the Directorate said: “on the backdrop of the kidnapping of the seven Estonians in the Bekaa region on 23/03/2011, investigations led to the arrest of the mastermind, Lebanese H.H. Born in 1983 (in reference to Hussein al-Hujairi) who plotted the kidnapping on the behest of al-Qaida cadre in Iraq.”

A special unit from the ISF Intelligence Branch arrested al-Hujairi in the outskirts of Arsal and Ras Baalbek in the eastern Bekaa valley after luring him to the area.

Al-Hujairi's record is full of law-breaking crimes as he gave orders to kidnap other foreigners after the release of the Estonians in return for a ransom, the communique added.

Efforts to bring al-Hujairi into custody were ongoing since the incident took place. And he was able to escape the efforts of the Intelligence Branch on 10/09/2011 where he was spotted in Arsal and engaged in a shooting spree. Hujairi was able to flee into the Syrian territories with some wounds.

He is also a suspect in the killing of Sergeant Elias Nasrallah whose patrol came under fire by armed men at the Jlala bridge-Chtaura in the Western Bekaa in September the same year, the statement said.

Information have also revealed that he is involved in the kidnapping of three BBC journalists and transferring them to Syria where they were later released.

The seven Estonians were freed in July 2011, almost four months after being abducted by armed men as they entered the country on a bicycle tour from neighboring Syria.

Justice Alice Chabtini is one of our finest Judges and she is renown for working under Book and Code, even her competitors acknowledge her intergrity. If the LAW says someone must be freed by paying 5LL.then this is what should happen.

so much for innocent until proven guilty...

FT, there is no such degrees of collaboration, this is crap, "oh yes i admit that i spied, but just a little", is this what you insinuate? just remember the good old french say: "qui vole un oeuf, vole un boeuf".

yes there is, for example, there is a difference between someone kidnapping, and someone who is arbitrarily appointed by a non-government regulated militia to handle arms and goes ahead and shoots an Army officer.

I don't get it, is he a salafist?... I'm asking because it said he's working for Qaida.

and unlike you M8 apologists, wrong in wrong. No shades of gray for you or anyone else.