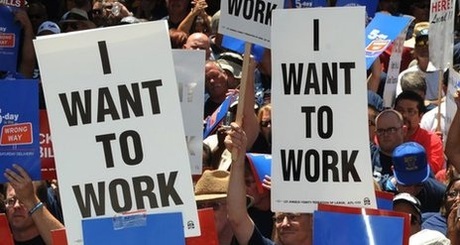 More than 73 million young people are unemployed around the world and the situation is expected to only get worse, the International Labor Organization said on Wednesday.

"The weakening of the global recovery in 2012 and 2013 has further aggravated the youth jobs crisis and the queues for available jobs have become longer and longer for some unfortunate young job seekers," the U.N.'s labor agency said.

The current jobless rate for the young of 12.6 percent was expected to keep swelling to 12.8 percent by 2018, when more than two million more youths will likely be out of work, ILO warned.

The agency underlined that young people today were especially hard-hit by the sluggish global economy and were nearly three times more likely than their older peers to be unemployed.

The picture meanwhile varies greatly in different parts of the world, and the ILO expressed particular concern about the situation in three regions -- the European Union, the Middle East and North Africa -- where youth unemployment rates have skyrocketed since 2008.

In developed economies and the EU, joblessness among young people for instance ballooned by nearly 25 percent in the past five years, reaching a devastating 18.1 percent.

The situation in Europe is expected to improve somewhat, although the youth unemployment rate will likely not drop below 16 percent until 2018, ILO predicted.

In the meantime, the continent is seeing a greater proportion of its youth being forced to take jobs they are overqualified for or to take part-time or temporary work.

Not only does this mean society is missing out on new skills from high-qualified youths, but also that the overeducated are denying less qualified young people from entering the workplace, ILO said.

Long-term unemployment or underemployment among young people carries a heavy price for societies, it warned.

"Perhaps the most important scarring is in terms of the current youth generation's distrust in the socio-economic and political systems," the report said, noting that "some of this distrust has been expressed in political protests such as anti-austerity movements in Greece and Spain."

While youth unemployment in Europe may steal most of the headlines, ILO stressed Wednesday that developing regions also face major youth employment challenges.

In the Middle East, for instance, the youth unemployment rate should reach 30 percent in 2018, up from 28.3 percent last year, while the rate in North Africa is expected to tick up from 23.7 to 23.9 percent during the same period.