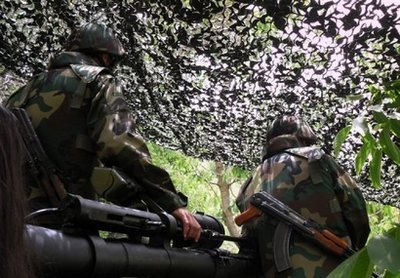 Iranians are working alongside Hizbullah fighters to back Syrian troops battling to retake the rebel stronghold of Qusayr amid fears of a civilian massacre, a U.S. official said Tuesday.

"It is the most visible effort we have seen by Hizbullah to engage directly in the fighting in Syria as a foreign force, and we understand there are also Iranians up there," a senior State Department official told reporters.

His information was based on reports from commanders of the rebel Free Syrian Army, but he was unable to give any estimates of how many Hizbullah fighters or Iranians were involved, and what exact role the Iranians were playing.

"This is an important thing to note -- the direct implication of foreigners on Syrian soil for the regime," he cautioned on a conference call in Muscat.

Many opposition commanders had reported that forces from Hizbullah "are directly engaged in fighting literally on the streets. They say that their men... are directly fighting against Hizbullah commanders."

"Iran's role and Hizbullah's role have grown substantially over the last couple of months," he warned ahead of a Friends of Syria meeting to be held in Jordan on Wednesday.

Observers have alleged that Hizbullah fighters were leading the battle for Qusayr in Homs province, three days after the Syrian regime began an assault to regain control of the town.

The town is a key strategic prize as it sits on the main highway between Damascus and the Mediterranean coast, and also controls rebel supply routes from the northern city of Tripoli.

The Syrian opposition had voiced concerns that "when regime forces do go into Qusayr, if they do capture it, that there will be retaliation against the civilian population," he added, stressing "there are still thousands of civilians in the city."

OK So now the Persians are helping the Syrians fight for their land against Chechyen and other assorted foreigners. Seems fair to me!

Si, but they never managed to keep them for a long time unlike Greeks, Egyptians, or Romans.

impossible! assad said he didn t need the help of hezbis or iranians... i guess they are there for a pilgrimage then....

The team at work in Syria, IS the team which assassinated Hariri and most other politicians in Lebanon ! The threads are only too clear today !

He is running low on alawite fighters and needs them to destroy damascus before he leaves it to the coast. This war is gona be long and bloody, took the afghanis 12 years and 1 million victim to topple the communist regime which was supported by the soviet empire

If those terrorists are surrounded, where they get their ammunition and food from? Are those beards going to rule Syria?

Those are not Arab lands, the Arabs occupied our lands and imposed their language and religion on us., Scotland, Wales Ireland are breaking up from England and imposing their own original language and culture, Scotland is on the way after over 1000 years. This is what we should do in Lebanon and Syria. The problem with the Arabs is they don't learn from history. It is never late to revert to our origins

John marina, first of all, you are not lebanese, secondly of all, most arab christians in the levant hail from the yemenis who are arabs. Thirdly we speak arabic and have done that for 1300 years. If you want to return to ancient cultures then which should one choose? Greek? Canaanite? Roman? Egyptian? Assyrian? Or how about returning to beeing african as our ancestors? Your selfhate is pathetic. Just be proud of what you are. We are more arab than we are non-arab and if the entire world would think like you then everyone would be changing their language and identity based on who occupied their country 1000, 2000, 3000 years ago. Grow up, arent you an old man supposed to be smart?

Are they butchering people and eating their hearts raw? Are they raping women? Are they killing priests? Are they kidnapping bishops? Are they targeting people from other sects and religions and torturing them? Ah, OK.

I like it when military big wigs like yorgo want others to fight yorgo-style while they 3am yergho on Naharnet and other bloody battlefileds! Aren't Lebanese the most brilliant human beings and tacticians? I can recall one great strategist and tectician, Dr. Arreet 7akeh who is known to say: amn al moujtama3 al massi7i tole3 art 7akeh bi art 7akeh while he trampolined into the arms of the Syrians at the height of their occupation. Now this is what I call a superb strategy and a ruse ploy. You go, 7ak...awati.

"His information was based on reports from commanders of the rebel Free Syrian Army".

Anymore evidence that Partition is the answer?

"Never interrupt your enemy when he's making a mistake."

I've been vocal re. this, and this will be the future if Iran sustains its military power and influence in our region. Iran will have the following dogs: second one called Lebanon and Syria being the first. Will not succeed in Iraq. Once Iran positions itself to reap the benefits is has been seeking, there will be no more feeding time for its dogs and discard them like toilette tissue. Or you chose to be an ally of the West where there will be an opportunity to offer you more if you know how to put yourself in the receiving side.

Who cares. Chechyns, Saudis, Yemenis, Kuwaitis, qataris, Turks, Somalis, etc, etc, etc have joined in for the rebels. Let them kill Each other.

Can it be more clearer than that?

mainly all arabian countries must turn into a democracy but slowly (phases)..the best is to start from school, this sudden change from one regime to another is very dramatic. most people wants freedom, but some extremists are taking adv. to take power as in egypt..i think arabian regimes to turn into democracy must start through learning..