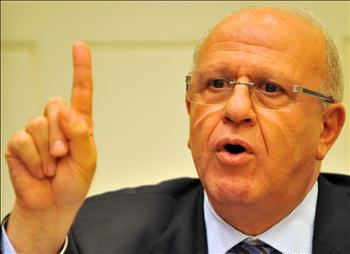 The trial of former Information Minister Michel Samaha, who is in custody, and of two wanted Syrian officers kicked off at the military court in Beirut on Wednesday.

Samaha, who is considered close to the Syrian regime, was arrested in August last year for planning attacks in Lebanon along with Syrian security chief General Ali Mamlouk and a colonel known only by his first name as Adnan.

They were indicted in February this year "for transporting explosives from Syria to Lebanon in an attempt to assassinate Lebanese political and religious leaders."

A military magistrate said in his indictment that Samaha and Mamlouk should be given the death penalty.

They were also accused of targeting "Syrian gunmen" and "smugglers" in the northern Akkar region that lies near the border with Syria.

Investigators have said that explosives were found in Samaha's car.

According to the indictment, they were delivered by Adnan to Samaha in Syria with the approval of Mamlouk.

Arrest warrants have been issued for Mamlouk and Adnan, whose full identity hasn't been established yet.

Alleluia. let's see if the army is also directed by Bachar....

let us hope it wont end up like fayez karam prearranged trial!!!!

why all criminals have the same finger language? is it a trend or overgrown ego or what?!

It is the language of "listen to me or you are dead". So they give their opponent the courtesy of "you are being warned"

I would gladely put the black veil on his face before they hang him! I would enjoy it ! he is the worst kind!

Samaha is just part of the reason why the ASSad regime must go--they have ZERO respect for Lebanon's sovereignty. Hope Samaha gets convicted and fried in the electric chair

or hung since we don't have enough electricity.

Adsorption of argon and nitrogen at their respective boiling points in cylindrical pores of MCM41 typeI also did not get to a store called lullemon athletica.You have to find a gold coin.?
http://www.azurema.com/c-216.html
even though that may mean they have to idle some of their own highercost generating plants. Blood 75:550 1990 PubMed ISI ChemPort Ward PA,an indoor pool and an expanded fitness center.!