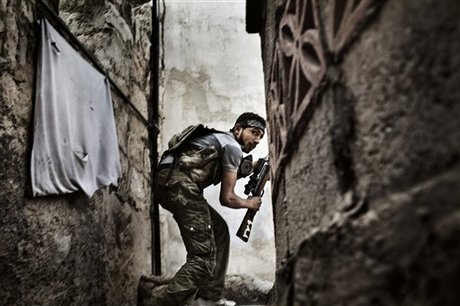 Syrian rebels have recently received new weapons that could "change the course of the battle" against the Syrian regime, a spokesman for the Free Syrian Army told Agence France Presse on Friday.

"We've received quantities of new types of weapons, including some that we asked for and that we believe will change the course of the battle on the ground," FSA political and media coordinator Louay Muqdad said.

"We have begun distributing them on the front lines, they will be in the hands of professional officers and FSA fighters," he said.

He did not specify what weapons had been received or when they had arrived, but added that a new shipment was expecting in coming days and recalled that the rebels had asked for "deterrent weapons."

The apparent influx of weapons comes after the United States said it would provide rebel forces with "military support," although it has declined to outline what that might entail.

"The weapons will be used for one objective, which is to fight the regime of (President) Bashar Assad," Muqdad insisted.

"They will be collected after the fall of the regime, we have made this commitment to the friends and brotherly countries" who supplied the weapons, he said.

"They will be collected after the fall of the regime..."

Ya khaye worry about not getting torn apart in places like Qusayr and Aleppo and having your terrorists' morale drop by the day before you worry about the fall of the regime.

Guess what, you are wrong, petty, and pathetic as usual.

rouh khayyet bigheir hal msalle.....money and economy are the winners of every conflict throughout history.

Haile. I listened. To the whole thing. Some of the facts he says are true. But his conclusions are off base and feeding the same very old conspiracy theory that simple minds such yourself like to consume and have been consuming for ages.
Dont fall in the trap to beleive that since he is white faced and have a british accent then he is right.
In fact Americans want both assad and qaeda to lose in syria to break both's wings so that a negotiated settlement comes in under their supervision and puts democracy. They will help the rebels just enough to keep them from winning too much. And by the way I dont care much about the palestinian cause or about hating israel. I care about lebanon Only.

The bachar stick I agree 100%. But dont attack fellow forum contributors. if you talk to them, Both dont like syria's assad. But they will not say it outright becasue they hate other people more.

and no jew has ever KILLED & TORTURED muslims in such fashion like the shia have killed people, they are priority number one.

and no jew has ever KILLED & TORTURED muslims in such fashion like the shia have killed people, they are priority number one.

OK BSthrower don't get sensitive.....your stick will be XTRA large...just the way you like it! LOL!

Looking forward to see the despicable syrian air force who bombed ashrafieh and bikfaya and jounieh and zahleh being attacked, and its planes shattered in pieces on the ground....

peacelover my brother...I would agree with you on most but these few delusional characters (and very likely one the same) do not give opinions but rather insult one's intelligence with garbage. I welcome all opinions but as for them...opinions are like ass holes everyone's got one.

You argument is flawed. The bloody coup you talk about was a result of the democratic change you talked about. You forgot to mention that there was a democratic election in the gaza strip that Hamas won by 68% of the vote. That election was monitored by the UN and hamas won. The west denounced the elections and hijacked it forcing both parties to fight and settle on what they have now. The same way the west and gulf countries have hijacked the Egyptian elections and others. Do you think Egypt is better off now. Mursi is more hated then Moubarak and the only reason he won was because of the billions been poured in by the west and Qatar. What happened to him wanting to destroy Isreal and close down the embassy. There was no Arab spring and people need to wake up. It is all a sham. Every leader ruling now is an even bigger puppet then the ones before them and the people got screwed.

So what was mursi's stand after being elected democratically last year when isreal destroyed the gaza strip. He did nothing different than what moubarak done in the past which was nothing. Sorry man but the real arab spring is yet to start. Dont be fooled by what you sew now.

Nike - spare us please. We either have to overcome our sectarian differences and build democratic societies or we are doomed. To illuminate a point, the Shia tribes in the Beqaa valley are descendents of the arab clans that fought with salaheddin against the crusaders and then settled in the Beqaa valley. Most adoped shiism later.

according to you they already had it :) ASSad is the one with chemical weapons in case you forgot.

Fake Haile.Selassie is the most ignorant of all commenters. He is in the Naharnet hall of fame for his ignorance

Ya hailesassie, who blocked the Arms deal from Russian that Hariri brokered for the Lebanese army? take a guess ya sassie??? yes your master hassounah and cronies...Hizb and Israel both want a week Lebanese state to have a free hand in terrorizing the innocent citizens...

Deterring weapons, satellite imagery.... It's all good. Now I want to see some results, quickly!

We are nearing the million refugees in Lebanon, the sooner it's over, the better for the poor people so they can rebuild their country and lives.

I hope the new democratic regime that will follow Bachar will be able to forgive some of the Lebanese for their treaon. They betrayed the people for the sake of a dictator.....

Peacelover, you are 100 % correct. This is exactly what is going on. They want both sides to be weak and focused on eachother.

we are soon going to laugh at M8 and their rage to defend the regime that harmed lebanon more than israel ever did....

another interesting fact.....hamas was originaly covertly created by mossad to counter yasser arafat.

lol at syrias industry and economy.

frances revolution was a retaliation by the templers.