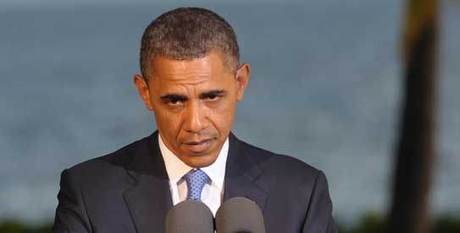 U.S. President Barack Obama on Wednesday called for a swift return to elected civilian rule in Egypt, saying the United States was "deeply concerned" by the military's toppling of Mohammed Morsi.

Obama also sent a signal to military leaders, ordering a review of the hundreds of millions of dollars in annual U.S. aid to Egypt in light of the army's move against Morsi, the nation's first democratically elected president.

"I now call on the Egyptian military to move quickly and responsibly to return full authority back to a democratically elected civilian government as soon as possible," Obama said, just hours after Morsi's ouster.

In Obama's strongest statement to date on the mounting crisis in Egypt, he also urged the powerful army to refrain from any arbitrary arrests and to protect the rights of all Egyptians.

But his statement fell short of condemning the military action, in what a U.S. official told Agence France Presse was a bid to strike a balanced tone and "avoid a spiral into violence."

Washington finds itself walking a tightrope, caught between the need to defend a democratically elected president while recognizing that Morsi failed during his year-long rule to meet the aspirations of many Egyptians who fought to oust long-time autocrat Hosni Mubarak.

Another failed US puppet ... They got this one really, really wrong. Morsi turned out to be the biggest idiot in the history of the Middle East. He offended everyone from his enemies to his allies with horrendous public relations and policy blunders.

Don't kid yourself and others, he failed because neither he nor his party lived up to the promises they made to the people of Egypt. Putting a higher priority on spreading and enforcing their Islamist ideology instead of putting food on people's tables is what got them booted.
In the end, all politics is local, if it were not for the swelling disenchantment among Egyptians who voted for him a year ago the opposition would not have been able to amass that much support to boot him out this time around.

" he failed because neither he nor his party lived up to the promises they made to the people of Egypt."

That is basically what I said ... In the end Morsi was even abandoned by his Salafist backers he was so incompetent ...

Mr president, relax, the great Egyptian people and army are fixing what went wrong during their Arab spring. Please sit back and let them finish what they started a year ago