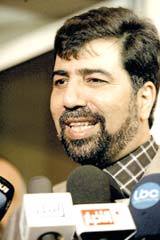 Iran’s ambassador Ghazanfar Roknabadi said on Thursday that four Iranian diplomats, seized in 1982 by a Christian militia in Lebanon, are still alive and being held in Israel.

“We believe that they are alive in Israeli jails. That’s why we have asked the Lebanese government to seriously follow-up the issue,” Roknabadi said following talks with Foreign Minister Adnan Mansour.

Israel at the time was carrying out a major military operation in Lebanon when the three diplomats -- Mohsen Mousavi, Ahmad Motevaselian and Taghi Rastegar Moghadam -- disappeared, along with Kazem Akhaven, a photographer with Iran's official IRNA news agency.

On Wednesday, Roknabadi called on U.N. chief Ban Ki-moon to respond to Tehran's demand for a U.N. probe into the fate of the four diplomats.

The issue was raised during a meeting with the U.N. Special Coordinator for Lebanon Michael Williams in Beirut on the occasion of the anniversary of the abduction of the four men.

Samir Geagea is the only person that can answer such a delicate question ! not the Lebanese government .

Michel Aoun who learned it from Bachar is the only person who knows what happened to the lebanese detained in Syria.

Michel Aoun who learned it from Bachar is the only person who knows what happened to the lebanese detained in Syria.

Phénicien, Hanoun is right, in 82 when Bachir was killed, the LF were divded in two , some with HK ELIE HOBEIKA, and some with Samir Geagea, but mostly at this time, the massacres that happened and LF's worst part was with HK, he is the one that brought up militia men to what happened in Sabra and Chatila, regardless that i supported Bachir and its fight against palestinians and syrians, this was a massacre, and it only happened because of him getting assassinated, because he wasnt the kind of guy that would go exterminate more than 4000 people and civilians mostly. Elie Hobeika was that kind of guy, and he is the one who most probably kidnapped those iranian diplomats.

Who cares? get the Lebanese from Syrian jails