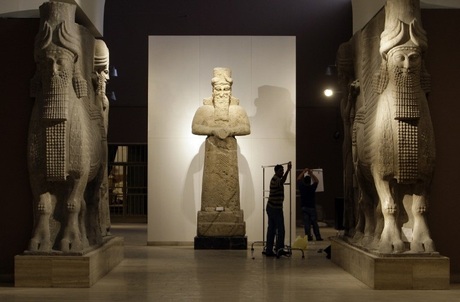 Baghdad reached an initial deal with the U.S. on the return of more than 10,000 artifacts stolen from Iraq after the 2003 U.S.-led invasion, a senior official said on Friday.

"We have reached an initial agreement... on returning more than 10,000 Iraqi artifacts that are in the United States," by August 2014, senior ministry adviser Baha al-Mayahi told Agence France Presse.

But there are still details that need to be worked out, and the artifacts must all be registered in an electronic archive at Cornell University in the state of New York before they are returned, Mayahi said.

The two sides agreed not to go into details about how the artifacts came to be in the United States, he added.

He said the U.S. was cooperating with Iraq on returning stolen artifacts, and that over 1,500 had been brought back to Iraq from the United States so far.

Some 15,000 artifacts were stolen from the national museum in Baghdad by looters in the chaos that followed the 2003 U.S.-led invasion of Iraq, Mayahi said. More than 4,000 have been recovered.

Authorities have recovered a further 130,000 artifacts stolen from elsewhere in the country, but there are still tens of thousands of pieces missing.