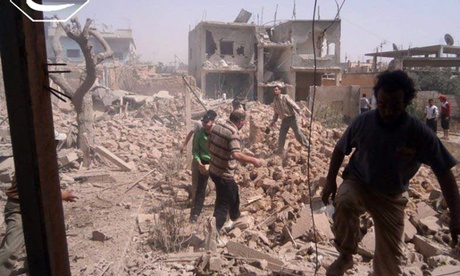 Two Islamist Lebanese-Swedish brothers who left their Scandinavian home for Lebanon, have died fighting alongside Syrian rebels, their cousin and a local cleric said on Saturday.

Their deaths have devastated their parents, who had already lost a third son Rabih to sectarian fighting in Tripoli last year.

Sheikh Mohammed said Moatasem, 18, blew himself up in a suicide car bomb at the checkpoint, and Hassan, 21, died in the assault that followed.

The youths apparently did not die in vain, as the assault on the checkpoint succeeded, said the cleric.

Cousin Jihad Deeb said that, although the youths had long been "deeply religious," the news of their deaths hit the family hard.

While still in Sweden just a year ago, Hassan had started his university studies. And had he stayed in Scandinavia, Moatasem would have started his degree this year.

"But they left everything and traveled back to Mankoubin, where their parents have been living for two years now," said Jihad.

Established to host families from Tripoli during a 1955 flood, Mankoubin later became home to people too poor to afford life in the heart of the northern port city.

Today, Mankoubin is an impoverished area that frequently gets dragged into sectarian clashes pitting Sunnis from the Bab al-Tabbaneh quarter and Alawites from neighboring Jabal Mohsen.

Tripoli's sectarian clashes erupt frequently, and their intensity has grown as a consequence of the war raging in neighboring Syria.

Eighteen months ago, Moatasem and Hassan's brother Rabih was killed fighting in one of those clashes.

The commitment to jihadist activities among family members goes further.

In 2007, one of the youths' uncles was killed fighting alongside Islamists in a fierce battle against the Lebanese army in the Palestinian camp of Nahr al-Bared.

Another uncle is in jail in Germany over ties to al-Qaida.

Once they returned to Mankoubin from Sweden, where they had lived for several years, the young men "decided to cross the border and join Jund al-Sham", said the sheikh, who stressed that no one knew of their plans.

Jund al-Sham is an independent jihadist group set up in 2012 and led by Lebanese radicals.

Jihad Deeb said "they had no work, and they lived in a poor area that has no state support. Most of us are not radicals, but you see many al-Qaida flags in Mankoubin."

Asked why he believed his cousins joined the rebels, he added: "Hassan and Moatasem really believed that Sunnis must fight there.

"But their father and mother are devastated. The father is near emotional collapse. And you can imagine how their mother feels; she has lost three sons."

The family was due to receive condolences from guests on Saturday, who would "congratulate" them for their sons' "martyrdom" in Syria, said Ibrahim.

I don't get why the army doesn't clean up Tripoli and take every single weapon there. They did it in
Abra Cadabra without the help of the terrorist militia, why not in the north? ;-)

Idiots. Their death is but a drop in the bucket. They'll be forgotten by tomorrow, except for their poor parents.

That is great. We don't need them in Lebanon. The only good thing coming out the Syrian war are the killing of hiz fighters and the extreme. Sunnis

Why are they terrorist if they are fighting with the rebels against a tyranical regime?
Definition of terrorist is those who practice indiscriminate terror against innocent civilians!
show us evidence that M14 is supporting the rebels or asking Lebanese Islamists to go and fight there.

They died protecting the people in syria when you were siting home like a coward.

This is the product of religious nuts praying on poor gullible young men.

Allah is surely separating the real Muslims from the fake ones..
Those that are commenting on the negative better start analyzing their lives cuz remember that this life is a very very small journey that no one even knows how long it is for..
The real life is the after life and if you die as a shaheed, then we should envy their deaths.

All SANE humans, whether Muslims or not, whether shiat or Sunni.. Can say that what's happening in Syria is just pure unjustifiable massacre !!!!